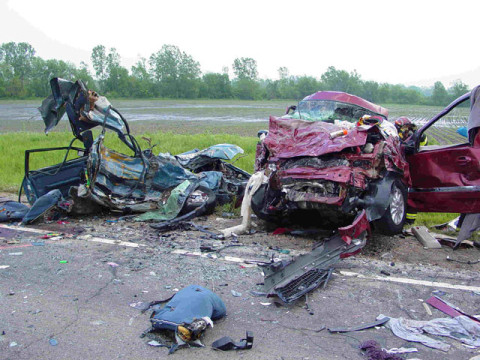 LAGOS, NIGERIA (AFRICAN EXAMINER) – No fewer than 10 people have been roasted to death in a ghastly motor accident in Badagry area of Lagos.

She said the 10 people were burnt beyond recognition while seven others sustained serious burns and injuries in the accident and had been taken to the Badagry General Hospital for treatment.

The accident occurred around between 10 and 11am on Tuesday and it involved two vehicles.

According to Rasak Fadipe, Lagos State Fire Service spokesman, the accident was fatal as a commercial bus burst into flames and burnt the occupants in the bus to death.

Fadipe said the accident involved a collision between two vehicles, a commercial bus with passengers and another vehicle.

He said immediately after the collision, the commercial bus bursted into flames with the occupants trapped inside it, with many of them burnt to death.