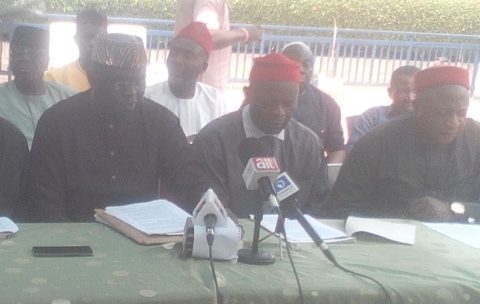 (AFRICAN EXAMINER) – The amalgamation of town unions in the South east geopolitical zone of Nigeria, under the auspices of Association of South East Town Unions (ASETU) has endorsed the Presidential candidate of the opposition Peoples Democratic party PDP Alhaji Atiku Abubakar and his running mate, Peter Obi.

They said the body took the position after wild consultations with various major Igbo key holders.

Addressing a press conference weekend in Enugu after they rose from an extraordinary expanded National Executive Council, NEC, meeting of the association the group listed many reasons why it took the  position.

According to them, one of the reasons, was what it described as a highly organised and orchestrated policy of marginalisation by the President Muhammadu Buhari-led administration against the South east zone of Nigeria.

The marginalisation evidence, it claimed, include obvious exclusion of the zone in appointments into critical positions such as national security council.

They equally Igbo alleged that it was clear that the federal government under the watch of President Buhari conspired to exclude the zone from the ongoing rail projects across Nigeria.

The union equally noted that restructuring was critical for Ndigbo which only Abubakar has expressed strong will to its implementation if elected, whereas President Buhari has remained daft on the germane issue.

National President of ASETU, Chief Emeka Diwe who read their communique to newsmen alongside   five President Generals of the five states in the zone also accused President Buhari of turning the region into battlefield through his fostering of intimidating security agencies on check points at parts if the zone to suppress the Igbo people.

“Therefore, in line with our natural disposition for self-survival, we shall continue to support those who mean well for the South east and Nigeria at large.

“That the wide acceptance of Alhaji Atiku Abubakar and Peter Obi combination, a detrabalised team, committed to the unity, peace and progress of the country by the People of the south east at home and abroad for February 16, 2019 election is hereby endorsed by the town unions in alignment with the earlier position of Ohanaeze Ndigbo and in completeness of the Igbo.

“As custodians of the grassroots, the town unions shall rise up in defense of the wishes of the majority of our people and stoutly resist any attempt by a few individuals and political merchants who are attempting to trade off the South east for their pecuniary interests.

The communique added: “We urge Ndigbo to take our destinies into our hands by trooping out, wherever we reside, to vote for the Alhaji Atiku Abubakar/Obi ticket,”

Our Correspondent reports that the group is made up of retired civil servants and businessmen from the five states of the zone.