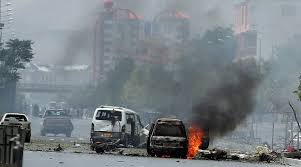 (AFRICAN EXAMINER) – At least, 57 people have been killed, while 119 people were injured in the Afghan capital Kabul in a suicide bomb attack at a voter registration centre.

Officials confirmed that the dead include 21 women and five children – killed when the blast hit the queue outside.

Voter registration began this month for legislative elections which are slated for October 2018.

Already, the Islamic State group (IS) has claimed responsibility for the deadly attack.

The terrorists group’s mouthpiece alleged a suicide bomber wearing an explosive belt had targeted the centre, which is in the Dashte Barchi area of western Kabul.

Afghanistan’s Interior Minister told media earlier in the year that both IS and the Taliban were targeting civilians to provoke people against the government and create chaos.

Sunday’s attack is said to be the Kabul’s deadliest since at least 100 people were killed in a district full of government buildings and embassies in January.