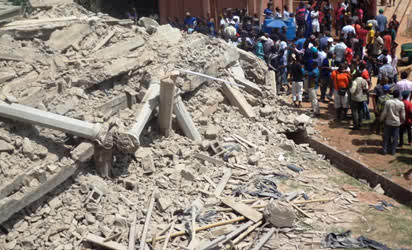 By Ayo Balogun, Lagos – A four-storey building has collapsed at Yaba area of Lagos, Nigeria with seven labourers escaping death.

The labourers had gone on break when the building under construction at 38  Commercial Avenue, Yaba collapsed around 2.30pm on Thursday.

General Manager, Lagos State Emergency Management Agency, LASEMA,  Kolawole Michael said that the building was under construction, confirming that nobody died in the collapse.

He said seven people worked on the building before it caved in.

“The building is located at 38 Commercial Avenue, Yaba. Fortunately, nobody died in the incident. All the workers in the building escaped. About seven workers, we were told escaped death. However, rescue operation is still in progress to the basement. The building is under construction,” he said.

“We cannot ascertain if anyone is still trapped until we finish with our rescue operation because all what we are dealing with now is the search and rescue operation on the collapsed building. It is when will conclude this that we will able to speak on that,” he said.

“There are two buildings by the side that are partially affected. One church and one residential building, no serious damage. Presently the search and rescue mission is ongoing. Nobody sustain injury because we were told they were on break when the incident happened.

“We can’t say yet until we reach the basement of the building. That is when we can ascertain that nobody is under the rubbles. But from the report that we were given by the workers, they said they are all complete. It is only after the exercise that we can make official statement on that,” he added.