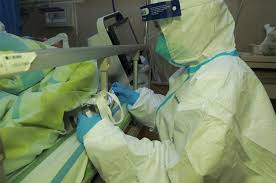 (AFRICAN EXAMINER) – The new coronavirus is still ravaging unabated as the forty Americans being taken off the quarantined cruise ship Diamond Princess is reportedly being infected.

US officials said among 400 people from the US leaving the vessel were docked in Japan.

Reports said most are due to depart for the US on two government-chartered aircraft. However, those carrying the virus will be admitted to Japanese hospitals.

Meanwhile, China has again tightened restrictions on movement in Hubei province, the centre of the outbreak.

The Diamond Princess has been quarantined in Japan’s port of Yokohama with some 3,400 people on board since February 3, after a man left the ship in Hong Kong and was found to have the virus.

The Japanese authorities Sunday said the number of new cases on board the ship had risen from 70 to 355.

Director of the National Institute of Allergy and Infectious Diseases, Dr Anthony Fauci, said the 40 Americans who are infected will receive medical treatment in Japan.