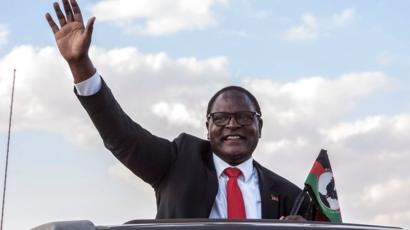 (AFRICAN EXAMINER) Lazarus Chakwera has been sworn in as president of Malawi after winning an election rerun.

“Time has come for us to wake up and to make our dreams come true,” Mr Chakwera said in his victory speech.

He defeated incumbent Peter Mutharika with 58.57% of the vote in Tuesday’s poll.

The country was bitterly divided in the run-up to this week’s election.

Other countries in Africa have had elections annulled – it happened in Kenya in 2017 – but for the opposition candidate to then go on and win a rerun is unprecedented.

Speaking ahead of Saturday’s results, Mr Mutharika said that while he found the election “unacceptable”, it was his “sincere hope that we should take this country forward instead of backwards”.

Saulos Chilima, Mr Chakwera’s running mate, was also sworn in as vice-president at a ceremony in the capital, Lilongwe.

Mr Chakwera, a Pentecostal preacher and former theology lecturer, will first have to heal a nation that has been through many months of political turmoil.