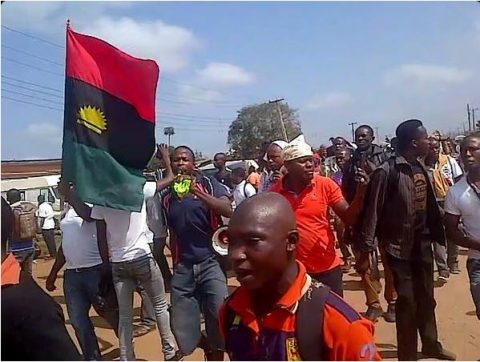 ABUJA, NIGERIA (AFRICAN EXAMINER) – The Defence Headquarters (DHQ) has debunked report published by Amnesty International AI which alleged that over 150 MASSOB and IPOB members were killed by the Nigerian security forces, describing it as ‘’vindictive, false and blackmail aimed at whipping up sentiments and insinuations against the Nigerian Security agencies’’.

DHQ in a release Wednesday, replied that if the AI ‘’video clip is anything to go by, then this is a pre-planned and concocted lie as the video did not show the bodies of those killed, even the morgue or even the place where they claimed to have been buried’’.

The Military statement cautioned that people of conscience should not be lured into unnecessary misgivings and feeling of disaffection as ‘’this is not the first time AI is accusing the security forces in Nigeria of such kind of unsubstantiated and biased allegations’’.

‘’How can security agencies assigned to protect citizens turn their weapons against innocent citizens? Where are those killed? It beats the imagination of any sensible human being to believe the so called video and its content. Moreso, if AI is truly an international organisation which respects parties in disputes, they would have consulted widely to balance their report but they failed to do that for reasons best known to them, especially when the scenario captured and the report itself is one sided and lacks conformity to both national and international standards. You cannot be a prosecutor and a judge at the same time on things that has to do with issues as important as this’’ DHQ argued.

The Military recall that AI embarked on such series of allegations against the Nigerian security forces as far back as the inception of Military’s action against Terrorist in the North East, alleging that AI would only celebrate activities of non state actors such as IPOB MASSOP and Boko Haram who take up arms killing, maiming, destroying public property, and creating a sense of disorder, rather, ‘’will always vilify security forces for trying to restore peace, normalcy and protect innocent lives and property’’.

‘’Where was AI when MASSOP and IPOB were employing all forms of instruments of cruelty attacking defenceless civilians in numbers attacking security forces and vandalizing patrol vehicles? Despite all these, the Nigerian security forces have exercised high level of restraint and professionalism in handling the illegal protesters’’ the Defence statement added.

AI, the Military urged should not in any way meddle national security with politics to ‘’achieve their own purpose’’.

It stressed: ‘’as an international organisation, you should remain neutral and not be involved in local politics where you operate. In as much as security forces in Nigeria acknowledge and respect AI as supposed to be a highly revered international organisation in, its avowed duty to the ideals of humanity, it will not accept reports and claims whose origin are at variance with the truth and will therefore not succumb to blackmail or be stampeded into accepting biased, unfounded and slanted reports from organisations with motives other than altruistic’’.