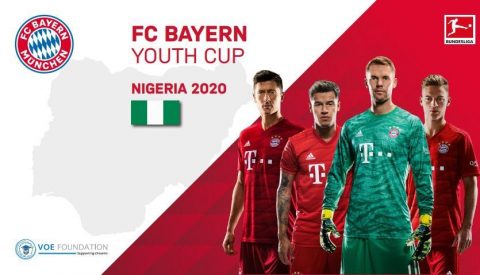 (AFRICAN EXAMINER) – Building on the success of the first two years of the FC Bayern Youth Cup in Nigeria, VOE Foundation has announced plans for the hosting of  the third edition of the tournament,  beginning from  November 2019 to January 2020.

The FC Bayern Youth Cup is an international tournament series held in different countries around the world with the best 10 players selected to represent each participating country at the world finals at the Allianz Arena in Munich, Germany.

African Examiner Sports reports that the 2020 tournament is open to boys born between 1st January 2004 and 31st December 2005.

Director of the tournament in Nigerian, and VOE Foundation representative, Mr. Victor Obinna Edeh, made this known to African Examiner in a press statement he issued Friday about the success recorded so far and plans for the 2020 edition,

According to the statement, : “We are delighted at the impact the tournament is having on the young players in Nigeria, we have a pool of over 25 very talented players who have been selected by the FC Bayern delegation over the last two editions who we believe will have big futures in the game and would be great ambassadors for our project.

“Already, 5 players from the group have received call-ups to the national U16 and U17 camps with Francis Daniel, enjoying a remarkable year and earning a place in the Golden Eaglets team representing Nigeria at the 2019 FIFA U17 World Cup in Brazil. We look forward to unearthing more talent and another life changing experience in Munich for the boys”

Edeh, added that “The 2020 FC Bayern Youth Cup Nigeria will reach more states so that players who have not had the opportunity to take part in previous tournaments can partake as we bid to grow the project. A total of 15 states will be reached and we would also introduce individual registrations”

“Abuja, Lagos, Kano, Kaduna, Jos, Kwara, Ogun, Ekiti, Ondo, Edo, Anambra, Imo, Enugu, Rivers and Akwa Ibom will all get a taste of the FC Bayern Youth Cup Nigeria 2020 with the National Finals billed you take place in January 2020 in the presence of FC Bayern Legend Giovane Elber: “It will be my first time in Nigeria and I am very excited about their skills and their African style of playing.”

“Gernot Rohr, German national coach of Nigeria, watched the final selection games in Feb 2019 in Lagos and was really impressed: “Initiatives such as the FC Bayern Youth Cup help us to boost interest of young people in football and motivate them. I have seen good players; it was a very committed tournament under good conditions. Giving kids the opportunity for a dream is a very nice present and therefore, thank you FC Bayern! I am looking forward to next year and will try my best to watch the kids play again.”

“Registration forms can be downloaded at the tournament website, www.youthcupnigeria.com or can be obtained at no cost at the participating state FAs.” he disclosed