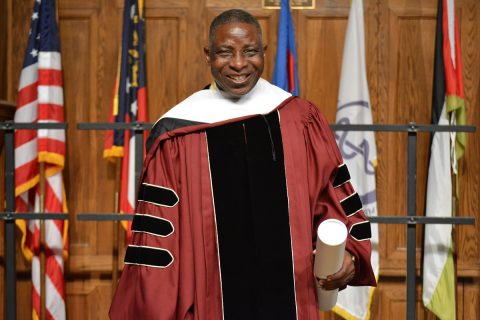 The induction ceremony which took place on the 4th of April at the Martin Luther King Jr. chapel Morehouse college hosted array of “cream Dela cream” respectable dignitaries and influential personalities  all over the  world whose work and  philosophy align with the  Doctrine and principle of Martin Luther King Jr.

The induction ceremony started with brief historical lecture and  tour of the  entire chapel  with explanation of all the portraits of distinguished personalities and achiever that  adore  the Archives and chapel hall of fame gallery.

The officiating dignitaries comprises of the Dr. David A.Thomas Twelfth President  of Morehouse College, Dr. Lawrence Edward Carter Sr. Founding Dean of  the chapel, who performed the charge of the induction to all  the 46 Inductees, Dr. David Francis Oliver, who gave the prelude Dr. Mel Foster who perform the roll call, Bishop Timothy Joseph Clarke  Senior Pastor of First church of God Columbus, Ohio delivered a sermon of the  induction ceremony while  the Morehouse college glee performed the music selection.

The Postlude “Jesus shall reign” was directed by Abin C. Wenthworth Dr. Oliver. The Honoree Luncheon and presentation of Gandhi- King -Ikeda community Builders prize which follow the induction was officiated  and directed by Dean Carter and Reverend Terry Farrell Walker.

The Secretary of state of Georgia Brad Raffenperger who was the distinguish special guest represent the state of Georgia very well at the occasion. He gave a glowing tribute to Martin Luther King Jr. Legacy, charge all the Honoree to be steadfast in continuation of their great works to humanity.

He honored the achievement of Amb. Tunde Adetunji selfless and meritorious service with the state of Georgia outstanding citizen award 2019. Amb Tunde Adetunji also presented a signature piece of  the bridging  the  gap  and  building the bridge  and  celebrate Africa journey  through the ages exhibition of the  centennial Olympics 96 to the chapel, which was  received by Dean Carter.

According to the organizer, the Board of Preachers, Collegium of Scholars, Board of Sponsors and College of Pastoral Leadership comprise of  the Martin Luther King Jr. College of Ministers and Laity. of individuals who use their passion, influence and resources to support the work of peace, reconciliation, nonviolence, justice and moral social progress famously preached by Dr Martin Luther King Jr.

This annual signature event Sponsored by the Martin Luther King Jr. International Chapel at Morehouse College, for 33 years, is priceless, and has attracted some of the brightest minds across an array of disciplines to engage in cosmopolitan dialogue, learning, growing and revealing. In recognition of Dr. King’s role as an exemplar of adaptive faithful servant scholar moral cosmopolitan leadership, a highlight of the College of Ministers and Laity is the induction of honorees into the Martin Luther King Jr. International Board of Preachers, Board of Sponsors, Collegium of Scholars and the College of Pastoral Leadership.

Like Dr. King, these individuals have demonstrated and are evolving toward great achievement in their chosen vocation, a profound commitment to their community and society, the planet and the cosmos and are living their lives according to a high standard of cosmopolitan ethical principles.

Adetunji in his acceptance speech described his induction simply as an act of faith, a manifestation of Gods promises on fulfillment of his destiny, and a blessing to humanity in disguise. “Let your light so shine before men, that they may see your good works and glorify your father who is in heaven. It is not by power nor might, but by the special grace of God that we emerge” Adetunji mirror his  induction as a turning point in his life carrier and  fulfillment of  his vision to bridge  the  gap and  build  the  bridge and  unite  the world as global  village for  peace unity Love  and harmony devoid  of  Race color  and  Gender. He faithfully and humbly concede and believe his best is yet to come.

Adetunji, a visionary, an idealist, a realist, and a prince born to a royal family in Nigeria. He is the, CEO/founder of the Africa Heritage Foundation, Africa World Museum & Center, Africa Day in Atlanta, Africa Radio and Television network and Africa/Atlanta project.

He is an expert and a consultant on Africa Affairs, a renowned presenter, an author, a master communicator, a motivational speaker and a researcher. He travels to universities all over United States and abroad promoting the theme “Africa Matters and Africa is the Future” and “Bridging the Gap and Building the Bridge between Africa and the Diaspora.” And “Turning brain drain into brain gain “His versatility and expertise, as art historian, curator, anthropology, journalist and lecturer has made him a foremost dignitary on Africa and the African Diaspora.

Ambassador Adetunji’s decade long global campaign of turning brain drain  to brain gain; Bridging the gap and  building the bridge to unite the world as global village for peace, unity, Love and Harmony despite race, color and gender” align with  the principle, ideal and value of Martin Luther King Jr. Gandhi and Nelson Mandela’s nonviolence  and racial discrimination.

He is part of think thank at the United Nations  whose  work as NGO in collaboration with Sdg7 2030 focus on building young  leaders with integrity to take  the mantle  of  leadership of the world by the  year 2030.  Adetunji’s work and career started as a global instructor for Swiss air which enabled him to travel and worked in over 110 cities in 57 countries of the world where his work has touched many people in their various aspect of life. A community oriented professional and a bridge builder who believes strongly in heritage and horizon which reflects vividly in his work on  integrity, discipline, respect to elders and constituted authority and humanity.

This inherent value gives him the audacity and hope for discipline and respect to promote the quality of Gandhi, Martin Luther King Jr. and Nelson Mandela along with his vision of Creating One world as global village to live in peace, unity and love together despite Race color and gender. He advocated this strongly through his doctrine of Bridging the gap and building the bridge and turning brain drain to brain gain to create human resources and capacity building for sustainable development and resources.

Amb. Adetunji visionary work has touched many people’s lives positively and has created a barrage of countless opportunities and directions for many to live a purposeful driven life, either from the encounter of his early morning biblical inspirational text messages of hope and  aspirations to millions across the globe, or through  his lecture series at various Universities or his sermon and  preaching in various churches or speaking engagement and broadcast on Radio and television. He has institutionalized wisdom and knowledge to many he knows and don’t know through his train the trainer program called the university life which has  prevented and kept many out of prisons or give a second chance to others.

Equally, he has worked with the homeless and less privilege in the society here in USA and Africa through his foundation Philanthropic project of giving back to the community, donating foods, clothing, shoes, books computers, hospital equipment.

Adetunjis aim of discovering and developing talent, creativity and science reside on the Art, Creativity, Broadcasting and publishing. This aspect of his foundation project has gained momentum internationally through his study abroad program, student and faculty exchange program and international student exchange project.

Africa heritage foundation vision of making Atlanta and the state of Georgia the epicenter and the gateway of the 55 nations of Africa economic potentials, business opportunity technology, human resources and capacity building has also become reality through the passing of resolution SR 9 and the visit of the chairman of Africa Union commission, His Excellency Jean Ping and United  Nations Undersecretary General Amb. Diara who met with former Secretary of State now Governor Brian Kemp to offer their endorsement and support on the Africa/Atlanta project.

This huge endorsement has boosted the successful operation of both Hatfield Jackson Airport now the biggest and busiest Airport in the world and seaport of Savannah now one of the largest container seaport in USA .

Governor Brian Kemp tenure as secretary of state also witnessed his endorsement of Africa Heritage Foundation partnership, cooperation and collaboration with the university system to Georgia to broaden their international student program and admission which now witness the emergence and influx of foreign students in university and Technical institutions in the state of Georgia.

To climax all of Africa Heritage Foundation successful visionary projects of  bridging the gap  and building the bridge, making Atlanta and the state of Georgia the epicenter and the gateway and capital of Diaspora as the six region of  Africa, Amb. Adetunji through the Africa heritage foundation has finally launched his successful campaign of the foundation world  Headquarter to be reestablished and commission in Atlanta Georgia.

Africa matters, Africa is the future, and from all indication Africa is the cradle of civilization and the birth of mankind thus the propose Africa Heritage foundation world headquarter in Atlanta henceforth is a blessing towards empowering  the state of  Georgia as the economic nerve center of USA to  reclaim back global economic power.

From all indication the proposed center has also carved a niche for Georgia as the melting port for nations for global initiatives and center for research for human growth, development and civilization.

“Team work make the  dream work”, as far back as the centennial Olympics ’96, Africa heritage foundation has partnered and collaborate with several organizations, institutions of  Higher learning, Individual and government to jointly execute programs, events and projects which has resulted and promote growth and development, diversity and  globalization.

With the apex of the future operation of the foundation reclining on the proposed commissioning of the Africa Heritage Foundation hosting the 55 nations of Africa identity in 2019, the foundation welcome support and collaboration of all and sundry to make it a fulfillment of heaven on earth for humanity.