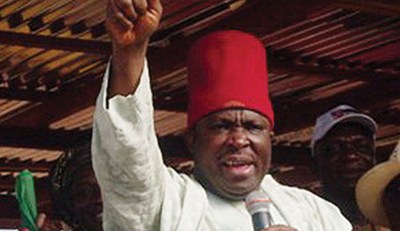 (AFRICAN EXAMINER) – Despite an order by a Federal High Court, sitting in  Abuja, Nigeria’s capital that Dr. Obiorah Okonkwo, of the peoples Democratic party, PDP be sworn-in immediately as the Senator representing Anambra Central senatorial district, the ruling All

Progressives Grand Alliance (APGA) has  ignored the order and flagged off its campaigns ahead of the rerun election of the zone scheduled for 13th January 2018.

Before the court verdict, the Independent National Electoral Commission, INEC had fixed January 13, 2018 for the rerun election.

APGA’s candidate for the rerun,  Victor Umeh, told his supporters that the rerun election would still  hold, saying the court  judgement was a ridiculous one, especially coming from a High Court in a matter that had been settled by the Supreme Court.

According to him, “I want to assure you that the rerun election must hold. Do no mind what they are doing, just get prepared with your PVCs to vote for APGA.

“But today where is she? She is no where. Obi also came out to join the race, and I told him he was not qualified to run and he said he is the rock and would contest, but what happened?

“I have never lost any legal battle, and I assure you that Obiorah Okonkwo is too small to confront me. I have survived too many court orders to fear this one from Okonkwo.

“The Okonkwo that court is asking to be sworn in as PDP’s candidate for that election held his primary election in Ogidi, Ekwunife held a separate primary at Nri, while Sylvester Okonkwo had his at Ojoto, and each declared himself winner, and a court thinks it is credible primary.”

Umeh, a former national chairman of APGA, expressed confident that the Independent National Electoral Commission (INEC) would abide by the order of the Supreme Court to hold a rerun within 90 days, stressing that he was confident that Okonkwo can not be sworn into the Senate under any law in Nigeria..

However, in a dramatic twist the state governor, Dr. Willie Obiano who accompanied Umeh to the rally,  declared himself the chairman of Victor Umeh campaign organisation.

He said he would stop at nothing to ensure that Umeh was elected into the Nigerian Senate as representative of Anambra Central  senatorial district.