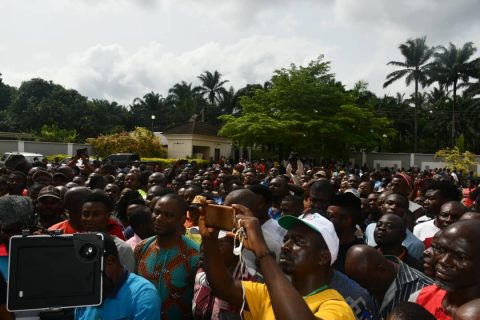 (AFRICAN EXAMINER) – The governorship candidate of the All Progressives Congress, APC, in Enugu State, Senator Ayogu Eze and his supporters on Saturday  boycotted the gubernatorial and House of Assembly elections in the State over the non inclusion of his name on the final candidate lists published by the Independent National Electoral Commission INEC.

Senator Eze told newsmen at his Umuida country home in Igboeze North  council area of the state that he could not participate in the exercise after the Independent National Electoral Commission, INEC, had failed to publish his name in the final list of candidates.

This is also as villages and thousands of his supporters lay siege at his residence demanding that the election should be called off until INEC do the needful,

Speaking to journalists, the aggrieved villagers and  Senator Eze said the INEC shut he (Eze) out of the exercise despite a valid court order asking the electoral body to  include his name in the governorship candidates lists before the election.

According him, “We are protesting because of the delisting of my name. You can see I’m being held hostage here by angry voters, who are protesting that INEC has not treated their candidate fairly.

“We are protesting because of the delisting of my name few days before election by INEC  and their inability to put it back, almost 48 hours after they were ordered to do so by a competent court of law.

“All these people have said they will continue to be here until the INEC does what is right, number one, to reschedule the election in Enugu, number two to put back my name.”