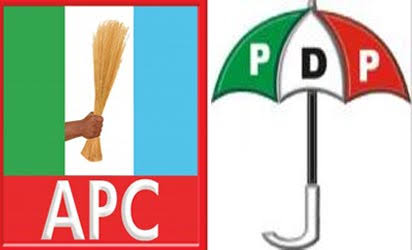 The opposition Peoples’ Democratic Party (PDP) has alleged that the ruling All Progressives Congress (APC) is inciting violence in Kogi and Bayelsa states with a view to cause confusion, frustrate the electoral process and possibly impede the forthcoming governorship elections in the states.

The PDP said the APC, having realized that it does not have the support of the electorates in the two states, especially given its unpopular candidates, is now employing devious machinations, including violence to terrorize the people, disrupt and eventually truncate the elections.

PDP’s National Publicity Secretary, Chief Olisa Metuh in a statement Wednesday said the imprints of the APC could be felt in the sudden militancy in Kogi as well as the growing cases of political violence in Bayelsa ahead of the November 21 and December 5 governorship elections in the two states respectively.

The party said, “the APC has perfected a heinous plot to inject crisis in Kogi and Bayelsa, ostensibly to frustrate the electoral procedures within the constitutional time frame, so as to prevent PDP candidates, Governors Idris Wada and Seriake Dickson from being re-elected into office”.

“We invite Nigerians to note that the build up to the militancy in Kogi has been long started by the APC and its candidate, Prince Abubakar Audu, who has been fouling the state’s political environment with hate and inciting utterances, including threats to lives of PDP supporters and perceived political opponents.

“Intelligence information available to us indicates that the APC has been training and arming thugs to unleash mayhem and destabilize the state ahead of the election.

“Recall that earlier this month, Prince Abubakar Audu directed these thugs to attack and “kill” PDP supporters and those perceived to be opposed to the ambition of the APC in the state. Nigerians should therefore not be surprised at the sudden militancy in Kogi state. We know that the aim here is to infuse confusion, truncate the electoral process and eventually rig the poll in favour of the APC.

“Also, in Bayelsa state, the APC in its desperation for power has been heating up the system and arming thugs, apparently to cause crisis in the state polity, frighten the electorate and possibly derail the election to their advantage.

“We are aware that the same set of APC thugs used during their primaries have now been further armed and instructed to attack PDP members and perceived opponents of the APC, intimidate electoral officials and disorganize the elections,” it said.

The PDP, therefore, charge Nigerians, all security agencies and the international community to note the evil machination of the APC and hold them responsible for the growing disturbances, especially should there be any breakdown of law and order during the governorship elections in the states.

“In the same vein, we call on President Muhammadu Buhari to see the two forthcoming elections as litmus tests of his democratic credentials. He should, as demands of him as the father of the nation ensure that he takes immediate steps to rein in members of his party, the APC in the two states.

“We also call on the people of these two core PDP states of Kogi and Bayelsa to be vigilant and ensure that they do not fall prey to the gimmicks of the APC in their desperation to subvert their will and steal their mandate.2 the party added.