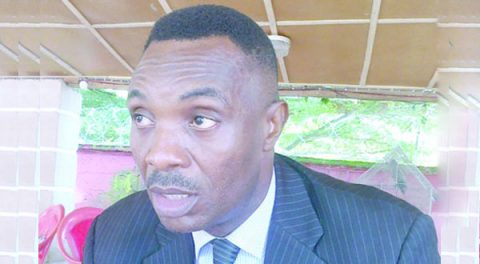 (AFRICAN EXAMINER) – The Enugu state chapter of the opposition All progressive congress APC, has rejected result of last Saturday’s local government election in the state in which the  ruling People’s Democratic party PDP was declared winner, describing the exercise as a complete “sham and electoral fraud”

Chairman of Enugu state independent Electoral commission ENSIEC, Dr. Mike Ajogwu, had on Sunday declared PDP winner in all the 17 local government council areas of the state, as well as 260 councillorship seats.

Our correspondent reports that although, the election was violence free, but was characterised by general aparty, as electorate in most council areas shunned the exercise.

speaking with newsmen, the Enugu state chairman of APC, Dr. Ben Nwoye, expressed total disappointment with the alleged shabby manner the Ajogwu, a senior Advocate of Nigeria (SAN) led ENSIEC conducted the exercise, which he described “as a complete sham and electoral fraud.”

He said: “I want to tell you gentlemen of the press that what happened in Enugu state on Saturday in the name of local government election was a complete sham and electoral fraud.

“The ENSIEC chairman, Mike Ajogwu, has killed democracy in Enugu state, because, this was exactly what he equally did in 2017.

“ENSIEC, distributed electoral materials in some places where the so called election took place without result sheets, because PDP  is afraid that if they conduct a free and credible election, our party, the APC, will defeat them so, that is why they always engage in this type of sham in the name of local government election in the state.

“All the information we got from our LGAs situation rooms are same. In totality, we are saying there was no election in Enugu state today.

Dr. Nwoye, also alleged that some of its party’s councillorship candidates in Uzo-Uwani, council area of the state were attacked and assaulted by suspected political thugs working for the ruling PDP.

Meanwhile, the Enugu state governor, Ifeanyi Ugwuanyi, on Monday swore in the said elected 17 council chairmen, and their Deputies, with a charge on them to make provision of infrastructure in their respective localities their watch word.