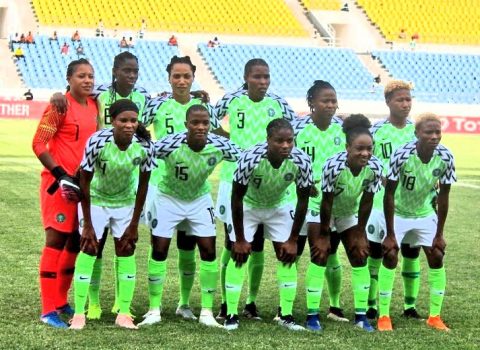 (AFRICAN EXAMINER) – Super Falcons on Wednesday redeemed their high rated image in a 4-0 win over the Shepolopolos of Zambia in their second group B game of the 2018 African Women Cup of Nations (AWCON).

Thomas Dennerby ladies proved to be worthy defending champions as the victory has kept hope alive for their title defence and a possible 2019 World Cup ticket in France.

The team began the  show with a strike from Desire Oparanozie three minutes to the end of first half.

Teammate Fransisca Ordega doubled the lead from a rebound of Oparanozie’s shot on the bar in the 69th minute.

Substitute Rasheedat Ajibade, who replaced Oparanozie marked her AWCON debut tournament with a beautiful shot home six minutes later to make it 3-0 for the defending champions.

The eighth time champions, however, sealed the victory with a spectacular Amarachi Okoronkwo thunderbolt at the 94th minute.

Zambia and Nigeria now have three points from two matches as South Africa is expected to face Equatorial Guinea in the second group game later in the day.

Three top countries from the eight-team event will qualify for the world stage in France. (NAN)