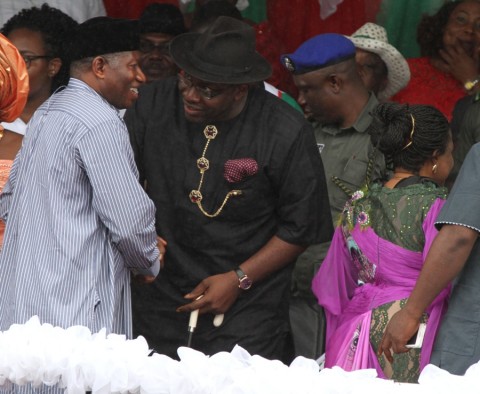 BALTIMORE, MD (AFRICAN EXAMINER) – Two weeks after former President of Nigeria, Dr. Goodluck Jonathan and wife, Dame Patience formally endorsed the re-election bid of the incumbent Governor of Bayelsa State, Hon. Henry Seriake Dickson in a mega rally at the Samson Siasia Stadium in Yenagoa, the state capital, the former president appear to have eaten his words. Governor Dickson has already emerged the sole Guber candidate of the ruling Peoples’ Democratic Party (PDP) in the state.

But as politicians upped the ante ahead of the December 5 governorship election in Bayelsa State, a wave of complex intrigue is now enveloping the political landscape. It emerged last Sunday (September 20th) that Dr. Jonathan and his wife are now secretly supporting Chief Timi Alaibe, one of the 18 Guber aspirants on the platform of the All Progressives Congress (APC). The APC governorship primary comes up on Tuesday, September 22 in Yenagoa.

Jonathan’s dumping of Dickson is not unconnected with his believe that the governor is uncontrollable and fears that a re-election of the governor may spell doom for the former first family’s quest to at least control Bayelsa politics from their Otuoke Court yard. The former First Lady is particularly angry that Governor Dickson is miserly and opted for Alaibe who is widely believed to be a pay master.

Sources close to the Jonathans claim their endorsement of Alaibe was a fall back strategy by the former president and his wife to forestall any possible persecution and to remain politically relevant in case the APC rigs out his party, the PDP, through the use of federal might in the election. The truce was reportedly brokered by ex-militant leader and one of the major beneficiaries of the Jonathan government, Government Tompolo. He was said to have held a lengthy meeting with Jonathan and his wife at their Otuoke country home last week before facilitating the meeting between Jonathan, wife and Alaibe on Sunday.

At the meeting yesterday, a source, who craved anonymity, said Tombolo laid out the strategic issues of the forthcoming election and the need to protect Jonathan’s interest in case the APC wins. As such the idea of having a Plan B which will hedge against possible persecution and loss of political relevance was tabled which invariably led to the suggestion that the former president should also support Alaibe, an ally of Tompolo and long standing business partner, was agreed upon. As a mark of his seriousness, Jonathan donated undisclosed whopping sum as his own contribution towards the funding of Alaibe’s aspiration, to clinch the governorship primary ticket holding tomorrow.

The source claimed Jonathan had earlier expressed fears that should APC take over the state, he would have to go on exile for fear of being persecuted by the APC-led government in Bayelsa State. With this understanding and following pressure from Tompolo, Alaibe was said to have agreed to work with Jonathan, assuring all parties to the arrangement that upon emergence as governor in February next year, he will respect Dame Patience, protect Jonathan’s interest and even go a step further to prevail on President Muhammadu Buhari not to witch hunt him.

“That is the nature of politics. There’s no permanent enemy but permanent interest. What is unfolding is baffling but it is true Jonathan is hobnobbing with Alaibe for strategic political reasons. I can tell you categorically that Tomoplo as the go-between had a meeting with him and his wife and Alaibe in Otuoke yesterday and all the issues were well discussed. It does not mean he has totally abandoned Dickson but based on the pressure from Tompolo, he wants to have a Plan B and it should interest you that he actually donated some dollars to fund Alaibe’s campaign to get the ticket in tomorrow’s crucial contest. That’s the situation but let’s wait and see”, the source said.

Meanwhile, it was also gathered that as part of his deft moves to clinch the APC governorship ticket, Alaibe has temporarily stopped to relate with the Senate President, Bukola Saraki for fear of hurting the presidency and the national leadership of the APC, who are believed to be behind Saraki’s travails. Saraki is a strong backer of the former NNDC boss. Both personalities had managed the defunct Societe Generale Bank as bankers at the apex and have since built a strong political alliance, making the Senate President to swear that he would do all he could to make Alaibe APC Guber flag-bearer in the forthcoming polls .