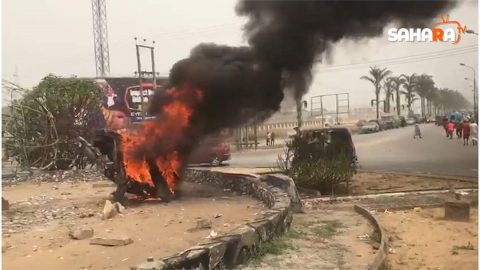 (AFRICAN EXAMINER) – The Yenagoa residence of the newly-sworn in Bayelsa State Governor, Douye Diri was Friday morning reportedly stormed and attacked by the suspected political thugs.

Upon the sack by the five-man panel of the Supreme court of the (then) Governor-elect, Mr. David Lyon and his Deputy Governor-elect, Biobarakuma Degi-Eremienyo of the All Progressives Congress (APC), the Independent National Electoral Commission (INEC) was ordered to issue Certificate of return to Diri – the candidate of the Peoples Democratic Party (PDP).

While the attack lasted, the hoodlums damaged some vehicles within the premises as well as some parts of the building.

Recall, the Supreme Court Thursday nullified the election Lyon and his running mate, Degi-Eremienyo, who were already preparing to be inaugurated into office today (Friday).

A five-man panel of the apex court led by Justice Mary Peter-Odili ordered the INEC to withdraw the Certificate of Return issued to the All Progressives Congress’ candidates as the winners of the November 16, 2019 governorship election in the state.