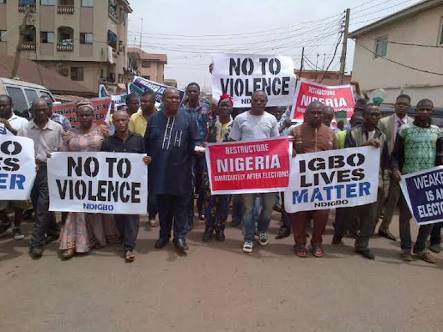 Disturbed by the continued protest by Biafran agitators in parts of Nigeria, Governors of South zone, and Elders in the area sunday  resolved to set up a committee to dialogue with the protesters and federal government.

The two groups to meet with are,  Members of the Movement For the Actualization of the Sovereign State of Biafra(MASSOB), and the Indigenous People of Biafra(IPOB).

According to the Igbo leaders, the setting up of the committee is aimed at finding a lasting solution to the agitations by the Biafran groups.

The resolution of the governors and the elders followed ongoing agitation by IPOB, MASSOB and other groups for the release of the Director of Radio Biafra, Nnamdi Kalu and realisation of Biafra Republic.

In a communique issued at the end of their one day meeting which took place at the Government House Enugu, th East Governors and Elders also resolved to set up a committee to immediately address the impasse on the apex Igbo socio cultural organzation, Ohanaeze leadership.

The Communique read by Imo state Governor, Rochas Okorocha, equally examined other issues including poor state of infrastructural facilities in the South East,marginalisation in the Federal appointments as well as other socio-economic issues that impact on the economic development of the South East.

The also meeting resolved to support the decision of the South East governors to set up an Economic Committee.

According to the communique, the Economic Committee would  interface with the Federal Government on remedial measures.

The meeting also  mandated a delegation of the Elders of the zone to meet with the president Mohammadu Buhari, to discuss issues relating to the zone.

“After a compassionate review of the recent MASSOB/IPOB agitations in the country, it was resolved that a committee be set up to dialogue with MASSOB\IPOB as well as the Federal Government with a view to finding a lasting solution to the issue” the communique stated.

However, the leadership of South East/South South Professionals met in Enugu with leaders of MASSOB, IPOB, OHANAEZE, during which it advised the apex Igbo body to  summon a meeting of Imeobi( Elders Council) to discuss the current situation in Igboland.

President of South/South Professionals, Emeka ugwuoju, who spoke onbehalf of the group, however advised MASSOB and IPOB to maintain peace as they have done so far.

The meeting condemned the rascaility of chairman of the Anambra State Chapter of OHANAEZE in publishing a position pertaining to himself and purporting it to be Ohanaeze,s stand, since his position does qualify him to speak for Ohanaeze” secretary General of the Igbo apex body, Dr. Nworgu stated.