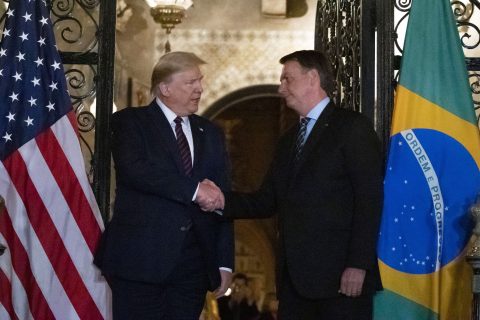 (AFRICAN EXAMINER) – President Bolsonaro also came in contact with a number of other politicians, including Vice President Mike Pence, Sen, Marco Rubio and Sen. Rick Scott as well as the entire First Family.

Despite the fact that they came in such close contact with two men who have tested positive for the virus, no one from the Trump family has placed themselves under a self-quarantine.

President Trump has also refused to be tested for COVID-19, despite his administration’s own task force urging those individuals who have come in contact with an infected person to quarantine and be tested.

The Brazilian leader has refused to accept the results of that first test as a fact however, and soon after took a second test.

The results of that test are expected later today.

A source with knowledge of the situation told The Sun that three other members of the Brazilian delegation who travelled to Florida over the weekend had also begun to experience “flu-like symptoms” in recent days.

That individual said two of those men had also been tested to see if they had COVID-19, but did not know the results of those tests./The Sun