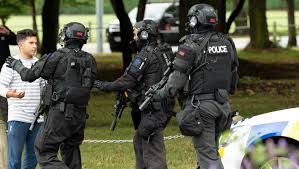 (AFRICAN EXAMINER) – 49 people have been reportedly killed and at least 20 others injured in shootings at two mosques in New Zealand city of Christchurch in the worst attack in the Pacific country’s history.

New Zealand’s Prime Minister Jacinda Ardern told a news conference that the mosque shootings appear to have been a well-planned “terrorist attack”.

“This is, and will be, one of New Zealand’s darkest days,” an ashen-faced Ardern said.

The prime minister also said two explosive devices attached to suspect vehicles were found and have been disarmed.

The two known targets were the Masjid Al Noor in central Christchurch, and a second mosque in suburban Linwood.

Sam Clarke, a reporter with TVNZ, spoke with several people inside the Masjid Al Noor mosque said “A gunman – dressed in black with a helmet carrying a machine gun – came into the back of the mosque and started firing into the people praying there.”