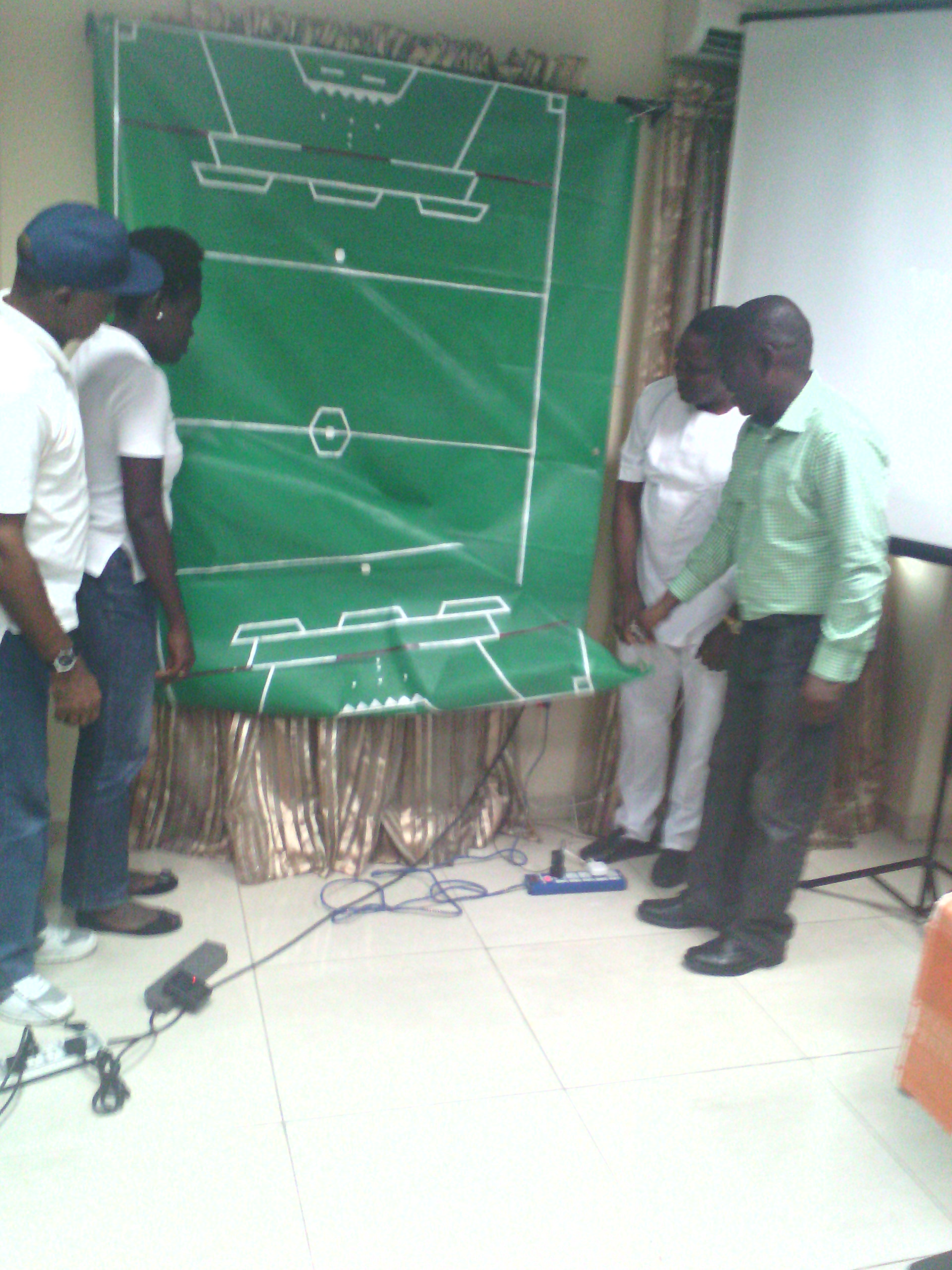 Opia (first right) and others unveiling the field of the game 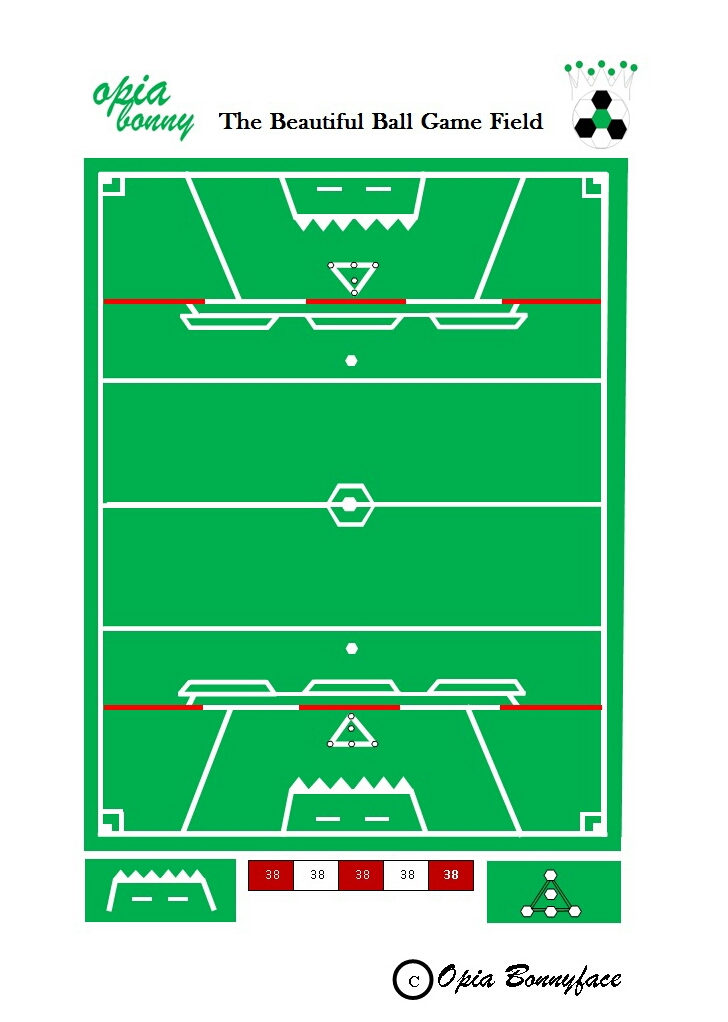 Field of the game

LAGOS, NIGERIA (AFRICAN EXAMINER) – As a measure to promote peace and conciliation in the society; gender equality and equity; education and learning, a fresh football concept: “The Beautiful Ball Game” has been unveiled in Nigeria, with the stern resolve to drive its acceptability and adoption within and beyond the shore of the country.

Speaking in Lagos at the proclamation of the new game, the initiator Dr. Bonnyface Oji Peter Opia indicated that the goals set out to achieve in the new game was shaped in his early experiences which coincided with the “cold war era”.

Dr. Opia, who is an erudite academia said at the proclamation briefing that the idea for the game was conceived in the 1990’s during his undergraduate years at the University of Benin (UNIBEN) but the actual development of the game started in “2008 and was completed in 2009”.

“I was motivated to embark on this venture by my desire for a world that can be beautified by a sport which will promote harmony and unite humanity using philosophies, concepts ways and means that are lacking in existing sports. The history of our world is laden with conflict between individual, organizations, communities, and countries with consequences that has greatly affected our ability to maximize our common wealth. Our world is currently witnessing new waves of terrorism, extremism”, he said.

He recalled he realized early in life that conflict could be largely attributed to “intolerance, ignorance and dominance seeking behavior and that inequality” could be due to stereotypes about relative standing in society.

Field of the game

Opia (first right) and others unveiling the field of the game

Sequel to this, Dr opia disclosed that he resolved to introduce something that will help humanity pursue the goals, restating that the game is set to achieve and subsequently ensure a truly beautiful world. He disclosed that the goals the game seek to achieve were part of the 17th Social Development Goals unveiled by the United Nations at the 70th United Nations General Assembly.

According to Dr. Opia, the game which is packed with various novelties in field design, rules and method of play, is played to achieve goals; the goals are embodied in crowns; the game is performed by 12 players; the 12th player is typically “humanoid” and will be “robotic”.

“The 12th player bears the crown that players in which the goals are embodied
With particular reference to the goal of achieving peace and conciliation between divided societies, a line in the field for the game called the line of restrain is situated at the 38th meter mark to draw attention to the conflict between North Korea and South Korea” Opia explained.

Speaking further, the initiator remarked that a unique feature of the new game is the role of a 12th player which bears a crown in which the goals that players seek to accomplish are embedded, a feature that is inspired by a feature of baseball and cricket.

He added that it is a game in which penalty kicks could be taken with no goal keeper in post while goals are scored under some conditions such as last minute goals.

In the world of sports, Dr. Opia observed that there has not been a significant development with respect to the new sport which will have enormous ramifications for global economic growth, employment, industrialization and entertainment as well as development as the new Beautiful Ball Game is expected to achieve.

“The introduction of the beautiful game at this time in history is a testimony of how our creative thoughts can be translated into tangible outcomes that will transform society. We are not unmindful of the fact that sports lovers all over the world have overtime gotten used to existing sports but the beauty of novelties is that they promote competition which creates value for society members.

“The administration of the beautiful game shall be the responsibility of an international body that will be set up. One unique feature of the international organization is that its constitution will include multiple stakeholders such as former world leaders. There shall be a parliament representing people of diverse constituencies in different countries whose voice shall count in decision making. The input of the parliament will be required in deciding allocation of hosting rights to international tournaments. The parliament will also be involved in resolving issues that may affect the outcome of matches” the founder enunciated.

Tournaments such as the world cup that will be mounted for the new sport, he announced will be incorporated to ensure the full application of corporate governance rules, while the involvement of the parliament in decision making is expected to help reduce match fixing.

He confirmed that the new game will be performed under three league systems, namely: “dedicated to individuals, families and teams”.

Aside its naturally attached fun, Dr. Opia disclosed that the Beautiful Ball Game also seeks to promote peace and conciliation.

Against this backdrop, the game founder urged leaders of nations, particularly the United States, China, Japan, Russia, South Korea and North Korea to see this game as having the potentials of fast tracking the process of resolving the Korean conflict and reconciling separated families. We call on the people and government of Nigeria to lend their support in adopting this game to solve critical national questions.

Giving the overall ramifications of the novelty for development, Opia also called on leaders of nations, captains of industries to embrace and support the new game.

He also demanded lovers of novelty, innovation, freedom of expression, association, diversity and others to support the desire to expand the depth and breadth of choice and opportunities.

While fielding questions on collaboration with the sports stakeholders, Dr. Opia lamented that syndrome of apathy to new idea especially at the instance of its success or failure was still present and pronounced in the government circle.

He also bemoaned the bureaucratic bottleneck in the public service, adding that if not for that, the extent at which the initiator and backers of the game intend to move is beyond the proclamation at this time. He however noted the principle support of the government officials on the new football concept.

On the time the first game will be played, Dr Opia stated pending the time all other details are worked out, yet, he noted the pioneer play could be live or via apps.

Earlier, former Governor of old Bendel State,Brig. Gen. Sam Ogbemudia said having listened to the inventor and watched the game visual presentation, he believed in it, hence had no hesitation in recommending it to the Federal Government (FG) for “adoption and support”.

The retired Gen recalled he had stated in his letter dated June 2012 to the former Minister of Sports, Hon Bolaji Abdullahi that the new invention “will cause a dramatic shift in football relations in favour of Nigeria”, such as yielding direct foreing investment and boosting tourism.

Gen. Ogbemudia who was represented at the proclamation by Hon. Eugene Okolocha noted that if the boxing has six world bodies, there is no reason why football could not have two. He therefore declared that what is required for the game to break even is the “tenacity of purpose and consistency of vision” on the part of the initiator.

He pledged his tireless support and “begin buy-in” into the worthy initiative”.