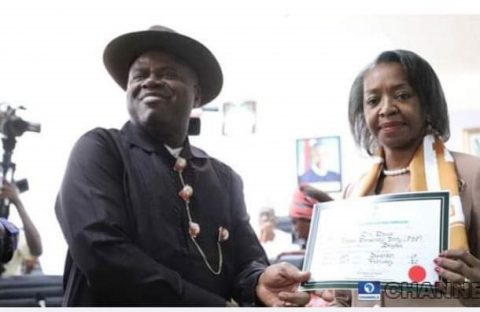 (AFRICAN EXAMINER) – After initial uncertainty over the interpretation of the supreme court judgement that nullified Mr David Lyon’s election as governor of Bayelsa state, the Independent National Electoral Commission (INEC) on Friday confirmed that PDP Candidate, Diri Douye is now the governor-elect.

The chairman of INEC, Prof. Mahmood Yakubu, said the PDP candidate met the provision of the law and would be issued a Certificate of Return in compliance with the ruling of the Supreme Court, which sacked the candidate of the All Progressives Congress, Mr David Lyon.

Recall that the Supreme Court on Thursday nullified the election of Bayelsa State governor-elect, David Lyon and his running mate, Biobarakuma Degi-Eremienyo, who were already preparing to be inaugurated into office.

The apex court ordered INEC to issue fresh certificates to the candidates of the party with the next highest votes and with the required constitutional spread of votes in the results of the election.