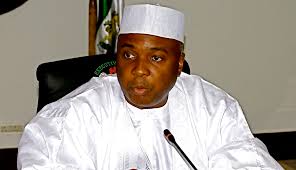 ABUJA, NIGERIA (AFRICAN EXAMINER) – The Senate on Monday, advised the Presidency to come clean with Nigerians on the 2016 Budget and stop engaging in surreptitious campaigns of calumny against the upper chamber in order to cover up its serial errors.

Reacting to claims in the media credited to the Executive arm of government on the 2016 budget,  Senator Aliyu Sabi Abdullahi, chairman, Senate Committee on Media and Public Affairs, in a statement in Abuja, said the National Assembly had bent backwards to wring a coherent document out of the excessively flawed and chaotic versions of the budget proposal submitted to the National Assembly.

He said : “while the executive is mandated to prepare and lay before the National Assembly a proposed budget detailing projects to be executed, it should be made clear that the responsibility and power of appropriation lies with the National Assembly. If the presidency expects us to return the budget proposal to them without any adjustments, then some people must be living in a different era and probably have not come to terms with democracy.”

“We make bold to say however, that the said Lagos-Calabar rail project was not included in the budget proposal presented to the National Assembly by President Muhammadu Buhari and we challenge anyone who has any evidence to the contrary to present such to Nigerians.”

“Since the beginning of the 2016 budget process, it is clear that the National Assembly has suffered all manners of falsehood, deliberate distortion of facts, and outright blackmail, deliberately aimed at poisoning the minds of the people against the institution of the National Assembly. We have endured this with equanimity in the overall interest of Nigerians.

” Even when the original submission was surreptitiously swapped and we ended up having two versions of the budget, which was almost incomprehensible and heavily padded in a manner that betrays lack of coordination and gross incompetence, we refused to play to the gallery and instead helped the Executive to manage the hugely embarrassing situation it has brought upon itself; but enough is enough.”