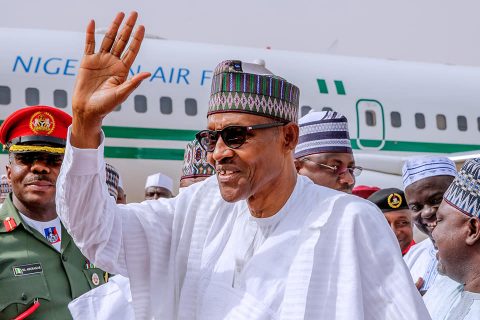 (AFRICAN EXAMINER) – President Muhammadu Buhari has arrived his hometown of Daura in Katsina State, North West Nigeria, preparatory to his participation in the rescheduled Presidential and National Assembly (NASS) elections slated for Saturday.

Buhari arrived Daura helipad at exactly 4 p.m. in company of some of his close relations and aides.

President Buhari was received on arrival by the Emir of Daura, Alhaji Farouk Umar, and some well-wishers.

While in Daura, Buhari is expected to join other eligible voters at Kofar Baru 003 polling unit, located at Sarkin Yara ward to cast his vote.

Buhari, who is the Presidential candidate of the ruling All Progressives Congress (APC) in Saturday’s elections, had on February 14 rounded off his nationwide campaign in Katsina.

He had later proceeded to Daura for the elections, which were then scheduled for February 16, before they were shifted by the Independent National Electoral Commission (INEC) for tomorrow, Saturday, February 23.