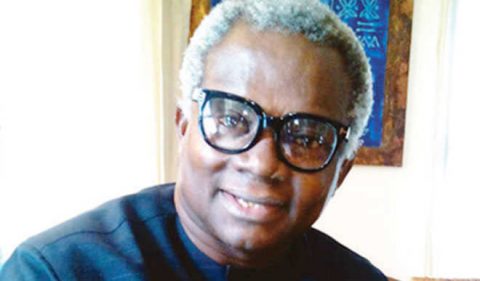 ENUGU NIGERIA,  (AFRICAN EXAMINER) – Director General of Voice of Nigeria, Mr. Osita  Okechukwu has called on Ndigbo to support President Muhammadu Buhari for a 2nd term, saying it remains the best and fastest way for the race to position its self for Nigerian President of Igbo extraction in 2023.

He stated this at the 10th Coronation Anniversary of Traditional Ruler of Olo Kingdom, in Ezeagu council Area of Enugu State, Igwe Ambassador L. O.C. Agubuzu.

The VON boss, who represented President Muhamadu Buhari at the occasion, argued that Igbo presidency could be faster and better achieved if Ndigbo support President Buhari for second term.

He warned that “if any other Northerner becomes president in 2019, the person will naturally seek another eight years in 2023.

The All Progressives Congress (APC) chieftain explained that “if Ndigbo embrace this government, they stand to appeal to their South West and South- South brothers to give them the chance, based on equity and justice, especially when both had served their turns, since our entry into the 4th Republic in 1999.

Okechukwu, said Ndigbo have a choice now to agitate for Biafra and alienate themselves or to harvest 2023 presidency, relying on equity and justice, two planks they could use to plead with their brothers from South West and South South who have had their turn, under the Zoning Convention.

He also use the forum to clear the doubts of those who query that Zoning is not in the 1999 Constitution of the Federal Republic of Nigeria, saying it has its moral weight and was the major determinant of the 2015 presidential election and the stabilizer of the nation in 1999, after the political instability that trailed the June 12 1993 presidential election which M.K.O. Abiola won.

Okechukwu, warned Ndigbo to stop agonizing with ancient grudges or the propaganda that Buhari will Islamise Nigeria and that he hates the Igbos, but rather, to organise for 2023, so as to produce the president of Nigeria of Igbo extraction, which will be a win-win for Nigeria.

He recalled that the great late ZIK of Africa, Dr Nnamdi Azikiwe, Owelle of Onitsha who led Nigeria to independence, designed and chartered the convention of political alliance between the North and Ndigbo in 1960 and 1979 and it was highly beneficial to both parties and our dear country.

The VON helmsman, further said that the intendment of ZIK that power should rotate between North and South could have worked and sustained democracy, but the failure of the two alliances led to the civil war from 1967 and 1970, which regrettably denied Ndigbo their turn to produce the president.

Okechukwu maintained that former president Shehu Shagari could have handed over to Dr Alex Ekwueme but for the military coup of 1983 which truncated the Second republic and again denied Ndigbo the opportunity of producing a Nigerian President.

He insisted that the Zik’s option remains the most pragmatic, realistic and sure footed in the quest by Ndigbo for national integration, progress and prosperity.

He urged those agitating for Biafra to respect the views of those who believe in the path chartered by Zik-for an alliance between the North and South-should be followed.

His words: “I have a dream of the goodies, progress and prosperity a president of Igbo extraction will bequeath to our dear country.

“Umunna Nnam, (meaning my brothers) this is our golden opportunity to actualise our dream for president in 2023. This roadmap is the best option, which our support for President Muhammadu Buhari,GCFR, definitely will enhance.

“For after his eight years the president will go South. Now, the important question we must ask ourselves at this juncture in the 4th Republic, is which trajectory will ZIK chart if he were alive in the circumstance, where the Zoning Convention of rotation of president is a major determinant? ZIK will naturally follow the Zoning Convention.

“Zoning Convention consolidated in the sense that since the 4th Republic took off in 1999, the president has rotated from the South, with Chief Olusegun Obasanjo, to the North, with Umaru Yaradua of blessed memory and to South, with Goodluck Jonathan, and now back to North, with Muhammadu Buhari, going South in 2023.

“If we embrace this government, we stand to appeal to our South West and South- South brothers to give us the chance, based on equity and justice, especially when both had served their turns, since our entry into the 4th Republic in 1999.

“This is the option the great ZIK will adopt if he were alive, as any other option is fraught with danger, will be more tortuous and uncertain.

“Nigerians are ready for Ndigbo; they admire our hard work and enterprise and are ready to vote for Ndigbo from Abuja to other parts of Nigeria, if and only if we follow the trajectory of our political father, the great ZIK of Africa.

“For the benefit of the young ones amongst us, may I repeat that the great ZIK in the collective interest of  Ndigbo and Nigeria in general designed, chartered and followed a trajectory of One Nigeria, and North-South-Allaince, which benefited our people immensely in appointments and projects and which today is classified in political parlance as Zoning Convention, where the president rotates between the South-North and North-South” Okechukwu said.

On the agitations for a Sovereign State of Biafra, he stated unequivocally that majority of Ndigbo want to remain in Nigeria, and even those who agitate for Biafra prefer it comes through democratic means and not by force.

While citing the disunity in his hometown, Eke, Enugu State, Okechukwu reminded those insisting on Biafra that they are not even united in their villages and towns, a worrisome phenomenon show cased at the 1996 Abacha and 2014 Jonathan Constitutional Conferences, where Ebonyi and Enugu States voted against region.

The APC chieftain recalled that when South-East traditional rulers recently visited President Muhammadu Buhari,GCFR, he extolled the virtues of Ndigbo and hinted how he had mobilized contractors for federal roads in South East, which previous regimes deliberately abandoned.

He said Ndigbo should be mindful that their roads were abandoned, in spite of their overwhelming and consistent vote for the Peoples Democratic Party (PDP), where their brothers and sisters got plum jobs, including SGF, Finance Minister, Deputy Senate President and chairmen of Works Committees in the Senate and House of Representatives.