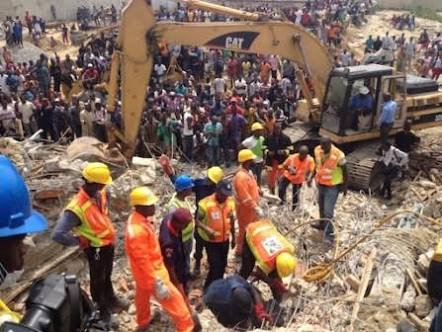 As death toll of the collapsed five-storey building in Lekki area Tuesday rises to 30, the Lagos State Government has halted further development of the Lekki Gardens’ Construction and issued 24-hour ultimatum to all directors of the Lekki Worldwide Estate Limited to report themselves to the police or face immediate arrest.

Still, the State government has expressed condolences over the death of construction site workers who lost their lives in the collapsed building under construction on Kushenla Road, Ikate Elegushi, Lekki.

In a press release issued Wednesday and signed by the Commissioner for Information and Strategy, Mr. Steve Ayorinde, the Lagos State Government also announced that based on preliminary reports and investigation, it was discovered that the collapsed building was served contravention notice for exceeding the approved floors and thereafter sealed by the Lagos State Building Control Agency.

The statement added that it has also been discovered that in a brazen act of defiance and impunity, the owners of the building, Messrs Lekki Worldwide Estate Limited, the promoters of Lekki Gardens, criminally unsealed the property and continued building beyond the approved floors until the unfortunate incident of Tuesday.

The Commissioner indicated arising from the State Executive Council meeting decision on Wednesday; the State Government would no longer tolerate the action of unscrupulous owners and builders who challenge its supervisory control thereby endangering the lives of Lagosians.

The State Government has consequently directed the suspension of work at the site and ordered the Lagos State Police Command to cordon it off as it is now a crime scene.

The government also directed further integrity tests be carried out on every other construction project which has or is currently being handled by Messrs Lekki Worldwide Estate Limited in the interest of public safety.

In addition, Governor Akinwunmi Ambode has advised all directors of Lekki Worldwide Estate Limited to submit themselves to the Lagos State Commissioner of Police within the next 24 hours in their own interest or face immediate arrest.

It however it would no longer be business as usual contending that any developer either on existing or new building projects who failed to comply with building and construction regulations or attempts to subvert the law will henceforth face criminal prosecution..

Speaking on death toll update the National Emergency Management Agency (NEMA) spokesperson, Ibrahim Farinloye disclosed that 12 more dead bodies were removed from the collapsed building on Wednesday, bringing the total to 30, with only 13 survivors so far.

The building under construction in Lekki collapsed on Tuesday. According to Farinloye, all the people evacuated from the building on Wednesday were all dead, saying that rescue operation still continued as at 4:54pm.

General Manager, Lagos State Emergency Management Agency (LASEMA), Mr. Michael Akindele, said rescue operation was still ongoing and that more bodies had been removed from the debris with no survivor.

He said 30 dead bodies had so far been removed from the collapsed building with only 13 survivors so far.