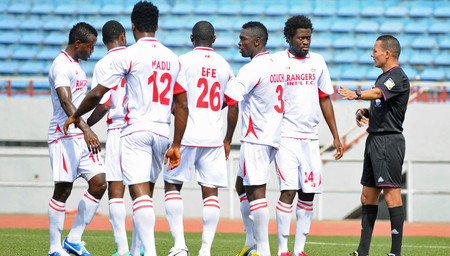 (AFRICAN EXAMINER) – Nigeria’s only representatives in the ongoing 2019 CAF Confederation Cup Rangers Inter. FC of  Enugu are through to the playoff round of the continental soccer tournament after coming from behind on Sunday to defeat  AS Pelican FC of Gabon 4-3 on goal aggregate.

African Examiner Sports reports that the Enugu club beside, was beaten 2-1 by the Gabon team during the 1st leg of the encounter played in Gabon.

The Flying Antelopes who won the 2nd leg 3-1 at the Nnamdi Azikiwe Stadium Enugu, were forced by their opponent to work hard for the victory as the visitors took an early lead through Striker Dertin Amores, Jersey No 27  in the 6th minute into the 1st half, after the player converted a sublime free-kick from outside the penalty area.

However, the Flying Antelopes equalized the goal in the 18th minutes via Ifeanyi George, Jersey No. 15 , a deployment that  raised the spirits of the home fans who believed that their side could win the match.

After cancelling the 1st goal, Rangers mounted serious pressure on the visiting side  as they tried to level the tie before half time but unfortunately it ended 1-1 at Halftime

The 2nd half was one way traffic as Rangers dominated from the start and the pressure paid off as Jersey No 23, Striker, Nnamdi Egbujor put the hosts ahead on the night and level on aggregate.

Barely four minutes later Rangers utility player, Olawoyin Ibrahim  kissed the opponent’s net at exactly 55 minutes into the 2nd half , making it 3-1 and 4-3 on aggregate to the delight of the home fans.

With the victory, Rangers have now qualified for the playoffs for the 2nd consecutive season and will be aiming to qualify for the group stages.