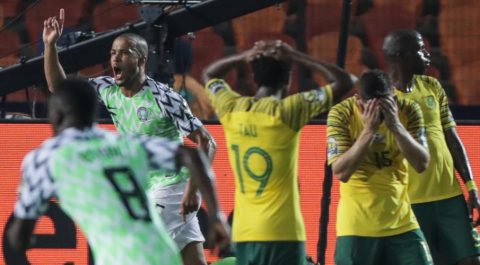 (AFRICAN EXAMINER) – Nigeria’s Super Eagles booked their place in the semi-finals of the 2019 Africa Cup of Nations (AFCON) tournament with an 88th minute goal by William Troost-Ekong.

The goal ensured a 2-1 victory for Nigeria over South Africa’s Bafana Bafana in their quarter-final match at the Cairo International Stadium on Wednesday.

Samuel Chukwueze had put the Eagles in front in the 27th minute when an Alex Iwobi square play into the dangerous area found Chukwueze.

The Villarreal player’s first shot was luckily deflected onto his path for a simple rebound to give the Eagles the deserved lead.

Nigeria made two changes to the starting lineup which came from behind to defeat Cameroun 3-2 in the second round.

Chukwueze was rewarded with a place in the starting 11 after his outstanding performance against Cameroon at the expense of Simon Moses, while Ola Aina made way for Jamilu Collins in defence.

It was perhaps the most open first 45 minutes Nigeria have played in 2019 AFCON so far as both teams engaged in end-to-end displays.

However, it was the Super Eagles who seemed to show more intensity with the two fullbacks — Jamilu Collins and Awazie — overlapping to add bite to the Nigerians’ attack.

Nigeria’s dominance finally paid off when a counter attacking move launched by stand-in skipper Ahmed Musa found Iwobi, whose quick feet on the flank was too much for Bafana Bafana defenders.

It was his low cross down the flank that led to Chukwueze’s opener.

A similar counterattack offered itself in the 35th minute involving Musa, who put his pace to work and found Chukwueze but the goal scorer squandered the glorious opportunity to double Nigeria’s tally.

The South Africans came out to play thereafter but found it difficult to penetrate Nigeria’s defence, anchored by Troost-Ekong and Kenneth Omeruo.

Their tactics of sending long balls to forwards Lebo Mothiba and Thembinkosi Lorch proved inadequate as Omeruo and Troost-Ekong always got the better of the South Africans’ aerial battles.

Nigeria started off the second half on the front foot and were inches away from making it 2-0 when Kenneth Omeruo’s fierce free-kick rattled the woodwork in the 50th minute.

South Africa were able to string some good passes together on the hour mark but they seemed to be weary of Nigeria’s counter-attacking threat led by Musa and Chukwueze.

Defending set pieces has been one of Nigeria’s undoing at this year’s tournament and it again manifested in the 70th minute when South Africa’s Bongani Zungu headed home a free-kick to make it 1-1.

The referee had to consult the Video Assistant Referee after it appeared that the South African player was offside.

But the goal was awarded as the cross appeared to have been deflected off a Nigerian player before Zungu’s header.

Simon Moses was introduced in the 80th minute to replace Musa, while the South Africans substituted Mothiba for the imposing Lars Veldwijk, apparently to win long balls in the Nigerian goal area.

However, it was the Super Eagles who punished South Africa in their own area as Troost-Ekong threw himself into a Moses corner kick and directed the ball home in the 80th minute to restore Nigeria’s lead.

There was one more opportunity from yet another counter-attack missed by Odion Ighalo but it won’t matter as the Super Eagles won the match 2-1 and moved into the semi-finals./NAN