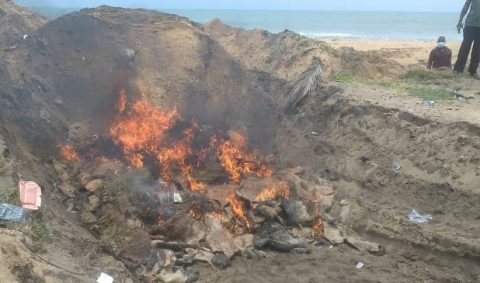 The Customs Area Controller of the command, Comptroller Muhammad Garba, led the team of Joint Border Agencies to the site where the animal skins were destroyed in Seme, Lagos.

Garba said that the deadly animal skin was intercepted by his men on Lagos-Badagry Expressway.

According to him, the command is going to widen its investigation to ensure that no unhealthy item escape into the country.

Garba added that the Nigeria Customs Service was not limited to revenue generation alone, noting that the command was also fighting against the smuggling and other related vices.

The controller also hand over 146 wraps of cannabis worth N112.4 million to official of the National Drug Law Enforcement Agency (NDLEA) for destruction.

Essien attributed the success of the joint border patrol to their synergy and cordial relationship.

He promised that the command would try its best possible to get to the root and brain behind the illegal substance.

The NDLEA commander said that regular briefing would be reported back to the customs service.

The News Agency of Nigeria (NAN) reports that the destruction of poisonous skin and hand over of cannabis were witnessed by official of Port Health Services.