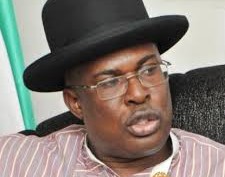 (AFRICAN EXAMINER) – The Governor òf Bayelsa State, the Honorable Henry Seriake Dickson has raised the alarm that leaders of the All Progressives Congress, Chief Timipre Sylva and Minister of State for Agriculture, Mr. Heineken Lokpobiri are trying to use the proposed visit of President Muhammadu Buhari to Bayelsa to foment crisis.

The Governor said in a statement signed by the Commissioner for Information & Orientation, Daniel Iworiso-Markson, that the APC chieftains had demonstrated an unimaginable level of pettiness and childishness by scuttling the standard governmental procedure for receiving a visiting President to a state of the Federation irrespective of party affiliation.

He condemned the decision of the Bayelsa APC leaders to prevent the President from landing at the Helipad within the Government House, Yenagoa, which he described as the most protected and safest location in Bayelsa.

The Governor also stressed that the Bayelsa State Council of Traditional Rulers should play the traditional role as royal fathers in a accordance with standard protocol and procedure in the society.

Governor Dickson stressed that his administration did not hesitate to release the stadium at great cost to the state government in addition to receiving the Vice President who led the Federal Government delegation to campaign for Sylva, his main opponent in the guber contest in 2015.

He recalled that as Governor, he has continually demonstrated adherence to the standard protocol and behaviors unlike Sylva who got thugs to stone and chase Buhari and his entourage out of Bayelsa during the 2011 electoral campaigns.

The Governor called on the President to caution his party members so that the state government whose leadership is reputed for political maturity could play its traditional role in the visit of a serving President to Bayelsa.

Dickson said that if the right steps are not taken to address the unbridled display of pettiness by Sylva, Lokpobiri and some gangsters masquerading as political leaders, the state government and its operatives would withdraw from the visit.

He said, “I wish to alert Mr. President and the public that the so called APC political leaders are planning to take advantage of the proposed visit of the President to create crisis.

“It is the standard government procedure that when the President is visiting a state, he is a guest of the state government. The governor is his chief host irrespective of party differences.

As Governor Bayelsa State, I am known for this kind of matured behaviour. In 2015, I personally received the entourage òf the Federal Government led by the Vice President, Prof. Yemi Osinbajo, even when they came to campaign against me.

“We condemn their childish and immature insistence that the President should land in a place other than the most secure and safe location which is Government House. This has been the practice for every visiting leader.

“The Government of Bayelsa State has given public facilities to the President in 2015 when he was running against Jonathan contrary to Sylva who when he was governor stoned Buhari out of Bayelsa.

It is part of the norm that the President is received by the traditional rulers council in the state.

“If they continue to undermine the security of the state, the state Government would have no role to play in this visit.

We call on the President to call them to order. If he doesn’t, the government of Bayelsa State and its functionaries shall play no part in the visit.