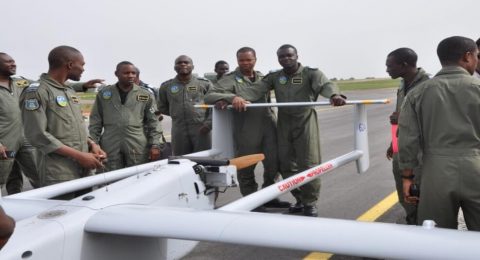 LAGOS, NIGERIA (AFRICAN EXAMINER) – Despite the huge risk involved, the use of drones has been described as a very veritable means to fight and check challenge of insurgency as well as militancy.

The CEO of Allianz, Delphine Maidou said this in an interview with the AFRICAN EXAMINER recently at a one-day workshop in Lagos, on risk management, organized by the Commercial Risk Africa in collaboration with other stakeholders.

Responding, Maidou who affirmed that drones were presently used by many western countries for border control and on crowd gathering restated that drone is very ‘’efficient’’, and it was cost less to fly them. She added that drones were equipped with very high quality camera, making the surveillance by them to result-driven.

Maidou who delivered paper under operational risks, with the topic: ‘’The Rise of the Drones’’ disclosed that drones is an emerging risk management, noting that its exposure to risk, subsequently results to huge loss, and posed ‘’serious challenge’’ to the African risk managers.

While reacting to low level of drones usage in Africa, the Allianz boss said poor education accounted for the situation. She said: ‘’People must learn about the use of drones’’, adding that, there was need for education, saying that it did not make sense not to insure drones, just as it constitutes ‘’a big liablity to the business’’.

The factors which account for poor level of in the use of drones, according to Maidou include regulation – for the authority to allow its use. Another challenge she indicated was lack of training of personnel.

Speaking further on the risk of drones, Maidou mentioned this include challenge of collusion; landing; crash into densely-populated areas and sometimes contents of what they carry around.

Sequel to more use of drones in many western and few African countries, the Allianz CEO who confirmed that a company requires the sum of $100,000 capital to operate a drone in Nigeria, submitted in her paper that, overtime, drone would constitute 10 per cent of the aircraft flying in the air.

Earlier in his paper titled: ‘’Risk Regulation’’ the National Commissioner for Insurance, Naicom Alhaji Mohammed Kari, stated that the challenge of risk management framework, include: ‘’money; human capital and most critically knowledge’’.

Represented by Mr. George Onokema, Alhaji Kari stressed, problems arise when risk managers are bereft of technical knowledge. He reiterated that when risk directors did not understand issues relating to critical risk management, they fail to make good decisions and recommendations.

The National Insurance Commissioner indicated that the challenge of poor knowledge was compounded by the endemic ‘’corruption’’ and prevalent wicked tendency in Nigeria.