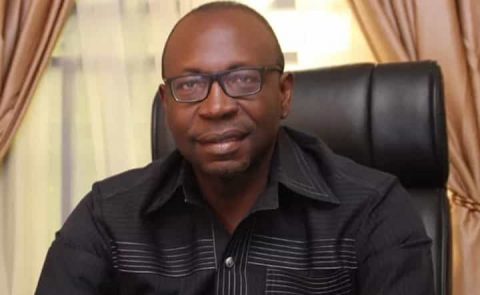 (AFRICAN EXAMINER) – The People’s Democratic Party (PDP) has urged Osagie Ize-Iyamu, the candidate of the All Progressives Congress (APC) in the Edo State governorship election, to state any positive comment made on him by the former national chairman of his party, Adams Oshiomhole.

It will be recalled that Ize-Iyamu was in the PDP in the last election and former APC national chairman, Adams Oshiomhole, had painted the present APC governorship aspirant in “bad brush”.

However, Ize-Iyamu had stated that the former chairman made some positive remarks about him and the PDP National Publicity Secretary, Kola Ologbondiyan, had urged him to list the positive remarks.

Ologbondiyan stated this on Sunday and he stressed that Ize-Iyamu had been “mortally devastated by myriads of negative public commentaries on him by Oshiomhole”.

He added: “It is already in the public domain that Oshiomhole, in his official capacity as governor of Edo State, declared and even swore before God and man that Ize-Iyamu is an impostor, a fake pastor, rusticated student, a career dropout, acid bath assailant, liar, treasury looter; an incompetent and questionable character, who is only good for night meetings and not fit to be the governor of Edo state, among other damaging testimonials.

“Furthermore, Ize-Iyamu’s claims, that Oshiomhole did not speak from his heart when he went public on him, is completely defeatist as the former governor repeatedly stated that he bore full responsibility for the statements he made against the APC candidate.

“Our party notes that Ize-Iyamu is not pursuing any defamation case to disprove the former governor. Instead, he is claiming that Oshiomhole also made certain fair comments on him.