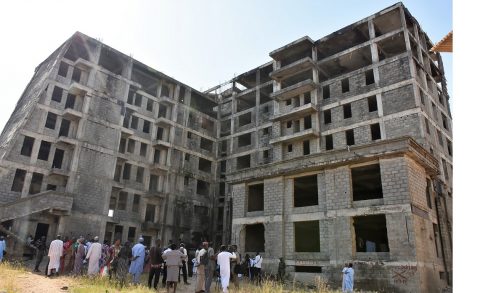 (AFRICAN EXAMINER) – The Economic and Financial Crimes Commission, EFCC, on Tuesday, December 31, 2019 handed over a property, forfeited to the Federal Government to the National Directorate of Employment, NDE, which will serve as its headquarters.

The EFCC got judgement for the final forfeiture of the property on behalf of the Federal Government on February 15,2018, in Federal High Court, Abuja, presided over by Justice Ijeoma Ojukwu.

The hand over formalities were conducted by the Secretary to EFCC, Olanikekun Olukoyede, who conveyed the Commission’s excitement at handing the ill-gotten property over to an agency of the Federal Government, noting that the hand over, just like the others that preceded it,  testifies to the successes of the anti-corruption fight.

Director General of NDE, Dr Nasiru Mohammed Ladan in his remarks, commended the Acting Chairman of EFCC, Ibrahim Magu for his relentless efforts in the anti-corruption fight, and expressed happiness that the NDE now has an office it could call its own, having occupied rented offices for 32 years.

Though the property is yet to be completed, Ladan disclosed that arrangements have already been put in place by the Federal Government towards a speedy completion of work on it.