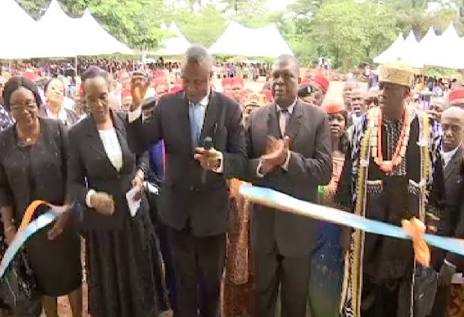 (AFRICAN EXAMINER) – The joy of people of Egede Ancient kingdom, in Udi  council  area of Enugu state, South East Nigeria, knew no bound as  government commissioned a state of the art multi -million naira customary Court building single handedly built in the locality by the traditional ruler of the community, His  Royal Highness, Igwe (Dr), Polycarp Oyigbo, the Okwuluoha 11.

Speaking during the official inauguration of the edifice, Igwe Oyigbo, explained that the gesture was aimed at ensuring that his people gets closer to judiciary, which he said, remains the last hope of a common man.

He said: “I did not build  this structure  because I have so much money, but I embarked on the project which is being commissioned today by the Enugu state government,  because I strongly believe that it will go a long way in attracting more developmental projects to our  community, Egede.

“With this little project I have done for my people, am sure it will move the state government to come in no distant time to Egede to  provide for us another social amenity. This project was executed with my personal resources, it is my widow’s might to my community. ” he stated.

According to the Igwe, the customary court which will serve the people of Egede\ Umuoka  would bring about speedy dispensation justice in the locality .

He however, challenged wealthy individuals to imbibe the spirit of complimenting government efforts towards provision of social amenities for the people at the grass root areas.

Inaugurating the building, president, Enugu state customary court of Appeal, Justice George Nnamani, said “the conception and actualization of this project is a manifest demonstration of patriotism and public – spiritedness by His Royal Highness Igwe Polycarp Oyigbo, (JP) Okwuluoha 11 of Egede ancient  kingdom.

“It is a welcome private intervention in the infrastructural needs of this arm of the Enugu state judiciary. It is reminiscent of the more elaborate intervention in time past by the British Department for International Development (DFID), for which we remain unendingly greatful.

“It takes a committed, selfless patriot to think of what he will do for his country, when everyone else seems to be concerned only with what the country will do for him\her.

“This gesture is very  much in sync with the evident vision and drive of His Excellency , Dr. Ifeanyi Ugwuanyi , the governor of Enugu state, for a modern, sophisticated, efficacious and firmly institutionalized customary court  system in the state which is complimentary to the enormous contribution of the customary court system to justice delivery and social stability in the polity.

“I want to use this opportunity to call upon all chairmen and members of all the 153 customary courts in the state to rise up to the demands of quick, cheap, and honest dispensation of justice as that is what customary court system is all about.

“I equally call upon on litigants in these courts to demonstrate reciprocal understanding and patience with the judges of these courts. I say this because I find alarming the resort by litigants and lawyers to habitual and incessant applications for transfer of cases from one customary court to another.

The president noted that while some of the applications have merit, a good number of them are barefaced attempts to filibuster proceedings in the face of looming defeat, stressing that such frustrating stratagem should be avoided.