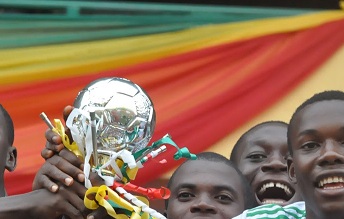 African Examiner Sports reports that the final match of the competition played at the Nnamdi Azikiwe sports stadium Enugu, had ended 2-2 at the end of the 90 minutes regulated time, leading to a penalty display.

It would be recalled that the Champions , also won the 2015 edition of the tournament which is being sponsored by a private firm, YKC, Nigeria Limited, as part of her community Social Responsibility programme.

Speaking with sports writers at the end of the encounter, chairman of Enugu state football Association (FA), and organizers of the Amateur  soccer fiesta, Hon. Chidi Ofo Okenwa, said “you will agree with me that synthetic football was delayed this afternoon by both tofms, but like you know, in every competition, there must be a winner and a loser.

Frankly speaking, “I must say that  the competition really lived up to expectation of the organizers, stressing that the state league had over the years, remained a veritable platform for the discovering, grooming and showcasing of some hidden talented younger footballers in the state.

Okenwa, added that the state FA, under his watch has been doing its best in exposing young boys of the state who are desirous of making soccer a carrier, but regretted that lack of needed facilities and equipments has remained a cog in the wheel of progress of the Association.

He pointed out that Enugu is the only state in the South- East and South- South geo political zones of Nigeria that its FA do not have an operational vehicle,  to assist the Association in penetrating all the nook and crannies of the state to hunt for hidden potential soccer talents.

Elated Proprietor of Purple Krown Academy, Mr Wale Alao, said he feel excited over the victory, thanking the organizers of the tournament for putting necessary logistics in place for a smooth competition, promising  that his boys will not let Enugu state down when they will be representing it in the national play off.