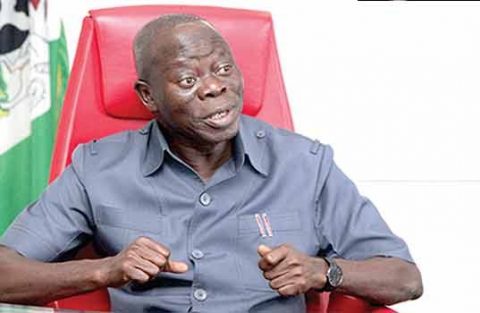 (AFRICAN EXAMINER) – The raging supremacy crisis between the ruling All Progressives Congress (APC) National Chairman Comrade Adams Oshiomhole and his successor – the Edo State Governor, Godwin Obaseki is far from being over, as the ex-Labour Leader has reportedly rejected Christmas gifts from his estranged political son.

The latest development was disclosed in a statement issued Wednesday by Obaseki’s Spokesman, Mr. Crusoe Osaige.

The Governor’s aide revealed that the rejected gifts included four cows and 10 bags of rice.

Osagie said the Governor put their differences aside by sending the gifts to the APC Leader.

The statement read in part: “The messengers said they met the mother of the former governor who rejected the items, stating that her son would not accept the gifts.

“The gift items meant for Comrade Oshiomhole include four cows and ten bags of rice.”

Governor Obaseki explained further that the distribution of Christmas gifts was an annual “ritual” by the state government which is an expression of love.

Governor Obaseki and Oshiomhole have since been at loggerheads over the control of the state Government machineries and the State’s APC.

The crisis still remains at stalemate, as both – Obaseki and Oshiomhole stil control good part of the South south State.

The political logjams have impeded the proper inauguration of the State House of Assembly, as the majority of Lawmakers loyal to Oshiomhole have rejected the Leadership of the minority loyal to the incumbent Governor.

Obaseki’s tenure will terminate next year and INEC is expected to conduct fresh Gubernatorial poll.