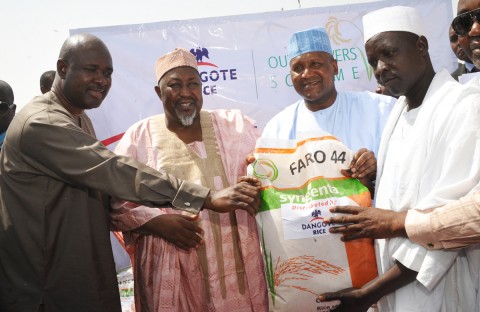 *As Fed Govt Charges Him to Take Lead in Rice Revolution

As the Government turns attention to agriculture to ease the pressure on the economy and create jobs, President of Dangote Group at the weekend flagged off his multibillion Naira 8000 hectares of Rice Outgrowers Scheme in Hadejia, Jigawa state as part of his partnership with governments at all levels to reduce food imports.

The launch of the Scheme marked with the distribution of rice seedlings to the benefitting farmers is with potential to provide direct jobs for 5000 farmers and another 5000 indirect jobs for various scheme dependants.

The rice project being executed by Dangote Rice Limited and expected to be replicated in six other states of the federation is a fallout of memorandum of understanding signed between Dangote and the Federal government on one hand and the Jigawa state government on another.

Speaking shortly before he made the distribution, Alhaji Dangote explained that Nigeria depended on Agriculture for economic development before the discovery of oil noting that oil was meant to complement the agric but sadly the nation abandoned agric and concentrated on oil.

“Before the discovery of oil, our economic was built around potentials from our palm oil, groundnut, cotton, and rubber plantations. Now the price of oil has plummeted from a peak of $116 per barrel in June 2014 to as low as $29 per barrel in January 2016, this means there is huge loss of revenue to the governmnet”, he lamented.

Justifying his decision to delved into agriculture, Dangote said Nigerian agricultural commodities and food imports bills has averaged over One Trillion Naira in the past two years 2013 and 2014, with foods like sugar, wheat, rice, fish accounting for 93 per cent of the total,cost of imports, a situation he described as unacceptable for anyone who loves the country.

He stated that the huge amounts were being expended on food items that the country has potential to produce locally with attendant losses of employment generation and wealth creation opportunities. “Yet the allocation of foreign exchange to import these items depleted the foreign reserves continually”

Dangote disclosed that the Dangote Rice Outgrowers Scheme has been designed as a one stop solution for the rice value chain. “Farmers will be provided with training, necessary inputs with guaranteed buy back agreed price, will improve yield, production and income for the farmers

Excited at the Dangote initiative the minister of state for Agriculture, Senator Heneiken Lokpobiri commended Alhaji Dangote for his intervention in the government efforts at providing food security for the citizenry, creating jobs and reducing dependency on food importation.

He expressed government readiness to provide all the needed support to make the Dangote Rice Outgrowers Scheme a success saying government not afford not to support.

According to him, a whooping sum of $the D20 billion is spent on importation of food items that could be produced locally.  The Federal government he said, would like Alhaji Dangote to take the lead in the government planned Rice revolution to save nation needless importation of foods and subsequent loss of jobs

The Minister noted that the government is putting in place a strategy that will make farmers have greater access to farm implements to help them produce with ease.

In his address. Of welcome earlier, Special Adviser to Alhaji Dangote on Rice and Coordinator of the Outgrowers Scheme but not more than 2.6 million metric tons are produced locally leaving the rest to importation.

This he said is a disturbing situation because NIGERIA is blessed with lands, good climate to support the cultivation of the best rice.

The Jigawa State governor, Alhaji Badaru Muhammed Abubakar thanked the Dangote Rice Limited for choosing Jigawa as the pilot state for the project. He pledged the readiness of his administration to provide all necessary support to the project.

The governor said he had no doubt in him that Dangote rice will succeed in Turing around the economy of his state saying the company’s exploits in other sector like Cement, Sugar, and lately in oil and gas is a pointer to the fact that Jigawa is lucky to host Dangote Rice.