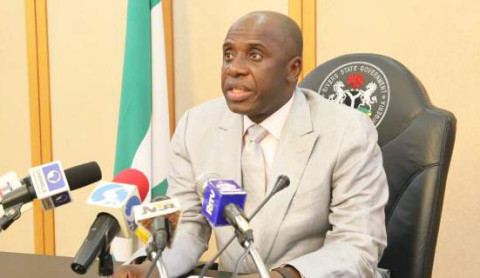 The Governor of Rivers State, Rt. Hon. Chibuike Rotimi Amaechi, on Tuesday presented to the state House of Assembly a budget of N485.524 billion for the year 2014.

The Governor at the presentation to the state house of assembly said the focus of the budget will be on completing ongoing projects in Health, Education, Roads, Transport, power, Water and Agriculture and other critical infrastructure.

The Governor reiterated that the economic sector is of priority to his administration. He told the Assemblymen that the Government’s objective in 2014 is to deliver sustainable infrastructure to drive economic growth.

“Our commitment to our ongoing agricultural projects will continue, being our hope of generating employment. It is expected that most of road projects will be completed in 2014.

“The prospect of our 24hr power supply target looks achievable in 2014 considering the level of investments so far and the new investments in  planned for this year. We are continuing with the network upgrading through provision of 20 Nos injector substation/33∝11kv OHL, 280 distribution – Transformers ∝TDC Rumuosi transmission substation.

“ We will be finalizing construction of the first phase of the monorail project before the end of this coming fiscal year. He added.

In the social service sector, Governor Amaechi noted that his government is raising the standard of education and healthcare in the State.

According to him, “significant resources will continue to be provided to improve and sustain these efforts. All outstanding projects here will be completed, in the area of furnishing of 2 model secondary schools, procurement of ICT equipment in school furnishing of 250 model primary school, completing of 100 new schools which was started in 2009 among others.

“This will also include amongst others: construction of Chief A.K. Hart hospital; upgrading of 3 zonal hospitals; and construction of 10 new health centres among others.  The operation of free medical services to all residents of the state will continue to be our focus”, he said.