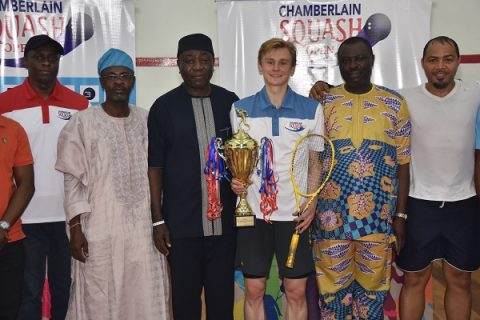 Speaking at the finals, the Governor who was represented Mr. Samuel Bassey said: “Looking at what I saw at the finals of the competition, it was grand. So, don’t be surprised if the Governor asks you (organizers) to stage the next edition in Akwa Ibom State”.

“The state is known for the promotion of sports in Nigeria and we have the best stadium in the country.

“We will give my report to His Excellency. The organizers did a good job by taking the initiative to single-handedly sponsor the maiden edition. This is good for sports development in Nigeria”, Udom restated.

The winner of the Open Tom Ford who was flown in from the United Kingdom by the promoters to participate in the event declared he was elated to have won the trophy.

“This was a fantastic event. I’m excited to be in Nigeria.

“The tournament has been fantastic; I think the PSA can learn a lot from the organizers on how this event has been run.

“I look forward to helping them (organizers) make this event a PSA tournament.

“I say a big thank you to my parents for their support, they are always behind me on and off the court and I am very aware of that so it’s a real blessing”.

“Their words of encouragement motivated and inspired me greatly”, Ford disclosed.

Also, the winner (Female category) Yemisi Olatunji, expressed gratitude to the organizers of the event, her family and fans for the support before, during and after the competition.

“I worked so hard for this event and put in everything I had to win it – it was an amazing feeling.

”I also want to appreciate the organizers for putting this tournament together, thank you for supporting the development of Squash in Nigeria” the female winner stated.

On their part, the first runners’up (male and female) Babatunde Ajagbe and Udeme James respectively expressed satisfaction and commended the organizers of the tournament.

”They have shown others the way to go from this tournament” Awobokun asserted.

The President of Nigeria Squash Federation (NSF), Mr. Boye Oyerinde, in his remarks at the closing, thanked the sponsors for finding squash as a veritable tool for sports sponsorship and assured that they will not be disappointed with their investments in the tournament.

He assured that the new squash board had since been reaching out to great minds to help reposition the sport.

Oyerinde said: “What Chamberlain Squash Open is doing in a nutshell is very much in line with what we are trying to do at the federation.

“Squash is the most beautiful game in the world, though, it is not a visible sport by design.

“I say by design because, I doubt if some of us in here know if there is a squash court in this place”, he added.

Also speaking at the championship opening briefing, NSF Secretary General, Samuel Aminu, said what CSO has done was to create massive awareness for squash in the country, which he noted had been relegated to the background.

He said: “I am really very thrilled today witnessing this new beginning for squash in Nigeria and I like to urge you all to join hands with the federation to revive the game and move squash to the next level.

“Chamberlain Squash has set a pace which everyone here needs to emulate and he needs to be commended for this initiative”.