Governor Ugwuanyi Under Criticism Over Demolition of Illegal Shops in Enugu 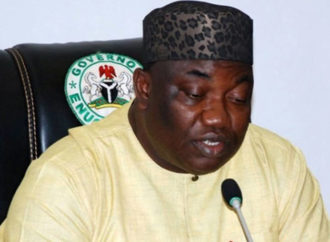 (AFRICAN EXAMINER) – The recent mass demolition of unapproved shops erected along major roads leading to the Ogbete Main market, as well as the New market, Enugu, as directed by the State Governor, Ifeanyi Ugwuanyi, has continued to attract sharp criticism and condemnation from residents of the state.

Some of the victims and residents who craved anonymity while speaking to African Examiner on the development described it “as man inhumanity to man”.

According to them, “we are not saying that government should not clear the roads for free flow of traffic and movement of people,  but our quarrel is that they did not give us any notice before carrying out the  wicked act.” said one of the victims, who claimed to be a graduate of Abia state university.

In his reaction, a victim and mobile phone accessory dealer, who simply identified himself as James and hails from Abia state, said “what governor Ugwuanyi and his agents did to us on Tuesday was very unfair, especially at this critical period when we are suffering the effect of the economic recession facing Nigeria.

,Imo state, added that “They did not give us notice to vacate our shops, apart from on Monday when the governor came to the market  to announce the demolition exercise already fixed for the next day, being Tuesday.

“This is part of the problem we are facing in this country called Nigeria, our elected political leaders, especially in the South East, are insensitive to the plight of their people. where does Governor Ugwuanyi, and his government wants us to go, now that we no longer have any source of livelihood, this is same man we all voted for in 2015.

“My brother, you the media people should help us let  the world know what has befallen us in Enugu, the most wicked aspect of the whole thing is that after the demolition, they seized our wares.

“This is same government that has not deemed it necessary to revive any of the moribund industries in the state so as to provide employment for the teeming unemployed youths of the state rooming the streets” the visibly angered victim stated,

However, our Correspondent recalled that Governor Ugwuanyi, had on Monday paid an unscheduled visit to the major roads leading to Ogbete Main Market and New Market, Enugu, appealing to traders who erected illegal shops on the roadside to immediately relocate as the structures are billed for demolition to sanitize the state and give the markets and the environs a facelift.

The governor, who was accompanied by the Commissioner for Environment, Ambassador  Fidel Ayogu, District Police Officers of Ogui Road Station, Enugu, and Central Police Station, Ogbete Market, Enugu, Senior Officials of the Enugu State Capital Territory Development Authority, among others, trekked the entire stretch of both markets to address the affected traders and identify illegal shops to be removed by the relevant government agencies.

He regretted that the master plan of the state has been distorted as a result of action taken prior to the inception of his administration, adding that such untoward act has hindered the efforts of the government to sanitize the state capital and restore its status as the historical homeland of the south east region.

Ugwuanyi, stated that the visit was in line with his leadership style to first interface with the affected traders to explain the imperative of the exercise as well as seek their understanding to enable the government carry out the sanitization without any undue harassment, and to ensure that they are not caught unawares, saying “that is not the style of this administration”.

During the visit, Gov. Ugwuanyi approved immediate employment for two occupants of illegal shops in front of the State Library Complex, who cried out to him for help after identifying themselves as unemployed graduates, struggling to make ends meet. The governor equally approved some financial support for 29 other affected occupants of shops in the location to enable them relocate.

He said “My people, I came here to inform you of our plan to clean up these areas and appeal that from tomorrow morning, whoever has business here should relocate inside the market or other approved areas.

“I am your brother and I do not want the police to come here and harm any of you. We want to sanitize the place so that all the vehicles that are supposed to ply these areas can do so smoothly and comfortably. If you paid anybody money to stay here, give me his or her name so that I will go and recover your money for you”, Gov. Ugwuanyi said.