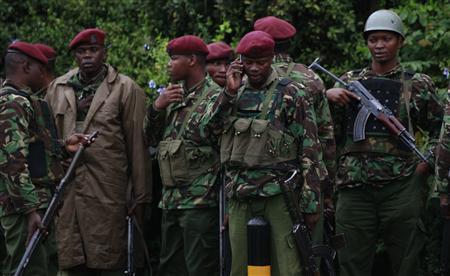 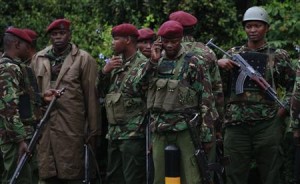 Kenyan policemen near the Westgate Shopping Centre in the capital Nairobi. REUTERS/Thomas Mukoya

Reuters journalists near the upmarket Westgate complex heard sporadic shots and also heavy bursts of rifle fire and muffled blasts on at least two occasions after daybreak. Kenyan troops moved around outside the building. A Kenyan Red Cross official, Abbas Guled, said there had been clashes inside the building.

But there was no indication of the fate of people whom the authorities had said on Sunday were being held by 10 to 15 gunmen – and possibly women – inside a large supermarket.

An al Shabaab spokesman warned that the Islamists would kill hostages if Kenyan security forces, who are being assisted by Western and Israeli experts, tried to storm their position:

“Israelis and Kenyan forces have tried to enter Westgate by force but they could not,” Sheikh Ali Mohamud Rage said in an audio statement posted online. “The mujahideen will kill the hostages if the enemies use force.

Security forces had secured most of the complex by Sunday, freeing many people who had hidden in terror. Though they hoped for a quick solution, rescuing those held will be difficult.

Survivors’ tales of Saturday’s military-style, lunchtime assault by squads of attackers hurling grenades and spraying automatic fire, has left little doubt the hostage-takers are willing to kill. Previous such raids around the world suggest they may also be ready to die with their captives.

In Somalia, Kenya’s northern neighbour devastated by two decades of civil war, al Shabaab have demanded President Uhuru Kenyatta pull out Kenyan troops, who have pushed the militants on to the defensive over the past two years as part of an African Union-backed peacekeeping mission. Kenyatta refused.

It was unclear how many may be held hostage. Colonel Cyrus Oguna, a Kenyan military spokesman, told Reuters that most of those freed in a search and rescue operation on Sunday had not been held by the gunmen but had found places of refuge. He said “a very small number” were still captive, but gave no detail.

“We will not negotiate with terrorists,” he added.

Asked at a news conference on Sunday about whether captives had been wired with explosives, Kenyatta declined comment.

The president, who lost a nephew in Saturday’s killing, vowed to hold firm in the “war on terror” in Somalia and said, cautiously, that Kenyan forces could end the siege.

“I assure Kenyans that we have as good a chance to successfully neutralise the terrorists as we can hope for,” he said. “We will punish the masterminds swiftly and painfully.”

A military spokesman for al Shabaab told Reuters his group had nothing to fear. “Where will Uhuru Kenyatta get the power with which he threatened us?” said Sheikh Abdiasis Abu Musab.