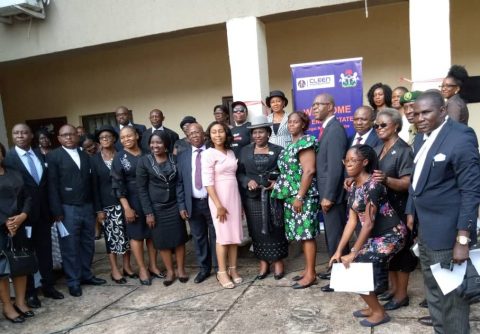 (AFRICAN EXAMINER) – The Independent Corrupt practices and other Related offences Commission, ICPC, as well as other relevant stakeholders in the administration of criminal justice in Nigeria, have stressed the need for concerted efforts by all and sundry in eliminating corruption in the country.

They made the call Tuesday in Enugu during the official inauguration of the Enugu State L;egal Resource Centre for the Hosting of Corruption Judgments in Nigeria, which was provided  by a non government organization (NGO), CLEEN foundation, and supported by MacArthur foundation.

South- East zonal Head of ICPC, Mr. Amedu Sule, who spoke via a senior staff of the organization, Mr. Ozi, had in a goodwill massage stated that corruption has done serious harm to the growth of the nation’s economy hence, the need for all Nigerians to join hands with all the anti-graft agencies in waging war against the cancer worm .

In his speech, Executive Director of CLEEN Foundation, Dr Benson Olugbuo, explained that the idea of the resource centre was conceived under the project centred on “promoting Accountability and Transparency in the Administration of Criminal Justice System in Nigeria.

According to him, “the project is targeted at the digitization of court proceedings/judgments in Nigeria with a view to promoting accountability and transparency in the fight against corruption.

Represented by the Assistant Legal \human Resources officer, in the organization, Esther Mabadeje, the CLEEN boss, added that ” the project principally seeks to monitor cases of corruption in relation to ACJA 2015 through a web based open source application called Uwazi.

He said the “Resource centre which presents a human capacity development and empowerment hub for critical stakeholders , such as lawyers, Researchers, civil society organizations , the media, judiciary , law students government agencies and experts in the field of justice shall be freely accessed at no cost” Dr. Olugbuo hinted.

Enugu state chief Judge,  Hon. Justice, Precilia Emehelu, in her remarks, noted that corruption had been a cankerworm that had stunted the development of the society, stressing  that Nigerians irrespective of status, creed and ideological inclinations must join the government and its anti-corruption agencies in the fight to stamp out  the menace.

The ceremony was graced by judges in the state, judicial officers, representatives of various law enforcement agencies, Staffers of WINET and Afrilaw, the media, Enugu-based NGOs, amongst others.