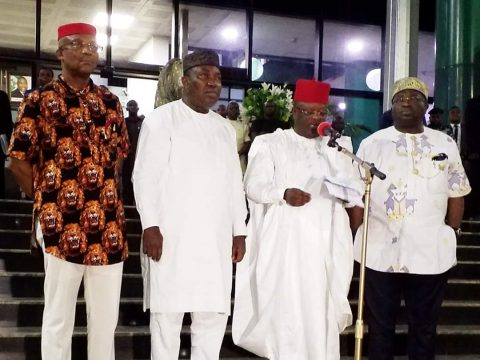 (AFRICAN EXAMINER) – Governors of South-East geo-political zone of Nigeria, Sunday said plans have reached advanced stage for the official lunch of its joint Security outfit, declaring that the zone was the first to form such security arrangement in the country.

The zone according to them formed the South East Joint Security on July 28, 2019 and inaugurated the committee on August 31, 2019.

Speaking through the chairman of the Southeast Governors Forum,  Chief Dave Umahi, at the end of its marathon meeting which lasted  over 6 hours, the governors said it was necessary to make the clarification because of the persistent calls from some quarters for the formation of a joint security outfit in the zone as recently done in south west Nigeria.

He said the forum took briefing from  the chairman of the joint security committee and were satisfied with all the arrangement that will lead  to the South East State Houses of Assembly to enact a law to back up the security programme with a name to the outfit.

The chairman, who is the governor of Ebonyi state added:  “we wish to assure our people that we have our state vigilante and the Forest Guards in all the South East states, who work with security agencies daily in our various communities for protection of lives and property,” Umahi stated.

The governors assured “our people that the protection of their lives and property is paramount to us and we are committed to just doing that.”

They commended President Muhammadu Buhari on the various ongoing projects in the zone, which includes, the Akanu Ibiam International Airport, Enugu; the second Niger Bridge and the Enugu/Port Harcourt highway.

On the airport, the governors stated: “Forum noted the quality and speedy progress of work by the contractor, PW Nigeria Ltd. Forum is very satisfied with the progress so far made and assurances of integrated safety and landing facilities, fencing and drainages incorporated in this project.

“Forum also commended the Enugu state governor for making more land available and his commitment in the overall success of the project.”

Commenting on the second Niger Bridge, the governors said it took brief from Governor of Anambra state, Chief Willy Obiano who was represented by his deputy, Dr. Nkem Okeke on the progress of work.

Umah said, “a full view of ongoing work was shown to the South East governors Forum and stakeholders commended Mr President, the minister of works, the chief of staff to Mr President and the managing director of National Social Insurance Authority (NSIA) for making this project a reality.

“With the level of funding by Mr President, we are confident that this project shall be completed in his tenure,” Umahi noted.

African Examiner reports that caucus members of the apex Igbo socio cultural organization, Ohaneze Ndigbo, led by the president-General, Chief Nnia Nwodo, had paid a visit to the governors during the meeting.