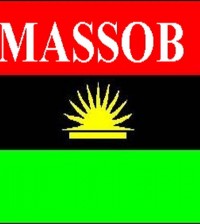 A Joint security Task force   in Nnewi North Council Area of Anambra State, on Saturday set ablaze the camps of members of the Movement for the Actualization of the Sovereign State of Biafra (MASSOB).

Leader of the team, who is also the Anambra State Deputy Commissioner of police (DCP) in charge of Operations, Agyole Abeh,  said the exercise was in line with the state Governor, Willie Obiano’s resolve to rid the major cities in the area of criminals elements and all forms of anti-social activities .

African Examiner reports that some of the flashpoints raided by the security operatives included Mbuze (an erosion site) which is said to be the den of men of the underworld in Uruagu quarter, Oduda Nnewichi and Obiofia.

At Oduda Nnewichi, the MASSOB’s camp was raided and allegedly set ablaze, just as items such as Biafran flags, attendance register, military wears, caps and items suspected to be charms were recovered in the place.

The team also recovered seven polythene bags of Indian hemp at Obiofia and other incriminating items.

However, MASSOB National Deputy Director of Information, Mazi Chris Mocha, while reacting to the development, described it as unfortunate and saw no reason or justification for the raid.

He said that the military wears allegedly recovered from the MASSOB’s camp were the properties of the organisation.

Hear him: “It is very unfortunate that our camp was raided and there was no reason for that even though we support the effort of the security Joint Task Force to rid state but particularly Onitsha of criminals, which should not be extended to us because we are not criminals.

“There is no reason for that raid. Those uniforms they said they recovered from us were not Nigerian army or any of the force’s uniforms. They are Biafran security uniforms. They are neither arms nor ammunition. So nothing justifies that military action against us. We have committed no offense,” the MASSOB leader stated.