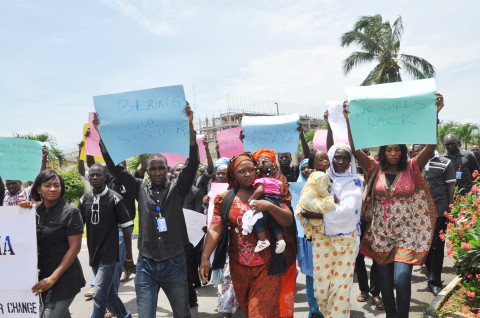 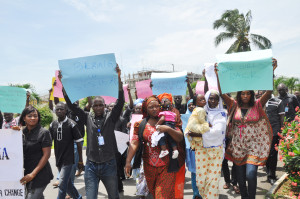 They demanded the release of the abducted girls. The protesters are indigenes of Kibaki, a community in the Chibok town, Borno State where 234 girls were abducted by Boko Haram few weeks ago.

The protesters came under the aegis of the Lagos State Chapter of  Kibaku Youth Association of Nigeria, carrying placards. They read:  “We want our girls back,” “We are patient enough,” “Governor Fashola, tell Mr. President to help rescue our Chibok sisters,” “Bring back our girls,” “Rescue the 234 Chibok girls,” “Bring our sisters,” “Education is not a crime, we want our girls back”  and several others.

The protesters were dressed in black attire to express their concern over the abduction of the girls, to call on the Federal Government, State Governors and the military agencies in the country to end the insurgency immediately.

“It is worrisome that the Federal Government and its agencies are not worried but relaxed in ensuring that these innocent girls are found, unharmed and freed quickly to reunite with their respective families,” said the spokesperson of the protesters, Moses Zakwa.

“Though we are in Lagos enjoying the peaceful atmosphere of the state however our hearts bleeds over this tragedy that has befallen these innocent young girls whom are our sisters, cousins, mothers of the unborn generation and future leaders of the country,” he added.

According to Zakwa, the group had come to the seat of power in the state to seek the state governor’s intervention to ensure that the central government and its security agencies expedite action on the release of the girls.

Mr. Mindia Chiwar, the group’s legal adviser decried that 14 days after the abduction of the girls, the security agencies were yet to ascertain the state of the girls or to ensure that these innocent secondary school pupils are released.

Chiwar added that it was more alarming that after the parents of the abducted girls took it upon themselves to conduct a search of the forest, they discovered the camp where the insurgents were holding the girls and immediately reported to the appropriate authorities, but that they were dismayed when no action was taken.

In his response, Governor Babatunde Fashola described hostage taking as ’’dehumanizing’’, adding that it was shocking that people now resort to the abduction of innocent young children in the country.

Fashola warned the protesters against promoting the thought that nothing was being done to rescue the abducted girls, saying that it is likely that the authorities might be careful not to take steps that would harm the girls in the process of trying to rescue them.