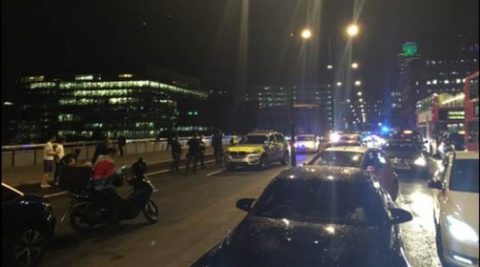 Six people have been killed and at least 48 injured in a terror incident in London in which three male attackers were shot dead by police.

A white van hit pedestrians on London Bridge at about 22:00 BST on Saturday, then three men got out and stabbed people in nearby Borough Market.

One of those hurt is a police officer who was stabbed after going to help. His injuries are not life-threatening.

The Conservatives, Labour and the SNP have suspended national general election campaigning and the prime minister is chairing a meeting of the government’s Cobra emergency committee.

London Mayor Sadiq Khan said it was “a deliberate and cowardly attack on innocent Londoners”, but the capital remained the “safest global city” and Londoners would not be cowed by terrorism./BBC