Many Injured as Building Collapses In Lagos 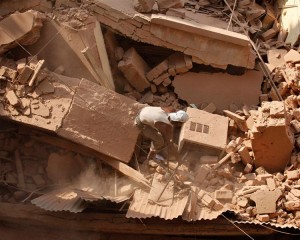 It was learnt that some of the people around the building when it came down sustained injuries.

Meanwhile, the Lagos State Emergency Management Agency (LASEMA) has confirmed the incident as well as the “casualties” involved.

LASEMA also confirmed that rescue teams have since arrived the scene and efforts were ongoing to help the victims.