Minister Urges Biafra Agitators To Be Constitutional In Approach 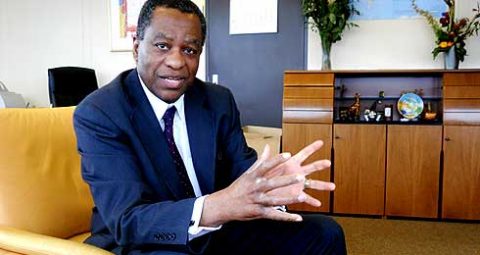 ENUGU, NIGERIA (AFRICAN EXAMINER) – Nigeria’s Minister of foreign Affairs, Mr. Geoffrey Onyeama, has advised those agitating for “Republic of Biafra” to follow laid down constitutional and Diplomatic processes, rather than engaging in uncivilized approaches.

He said though, it was the fundamental rights of the agitators to clamour for Biafra, “but they should be rational and not emotional in going about it.

Speaking with newsmen weekend in Enugu shortly at the end of a stakeholders/caucus meeting of the Enugu state chapter of All progressive Congress (APC), Mr. Onyeama urged those spearheading the breakaway project to critically look at the rules governing secession.

Besides, he posited that those leading the agitation “are not speaking for Ndigbo, as they do not have the mandate of the Igbo race to do so”, adding that they should embrace dialogue rather than violence at all times.

He however, called on Nigerians, particularly those of south east extraction, to keep supporting President Muhammadu Buhari, led APC government, stressing that the administration has the capacity to tackle the present challenges facing the nation.

According to him, the administration has put necessary mechanism in place aimed at addressing the present economic recession confronting the country.

In his remarks, convener of the meeting and Enugu State Chairman of the ruling party, Dr. Ben Nwoye, assured the national leadership of the party that the state chapter is highly committed in wrestling power from the Peoples Democratic Party (PDP), come 2019.

He said existing ,political structures were currently been oiled and strengthened at all levels in the state, calling on true democrats and progressives to embrace the party so as to enthrone a better Enugu state in the next political dispensation.

Dr. Nwoye also appealed to Nigerians to exercise some patience with the President Buhari, led federal government, as it makes frantic efforts towards stabilizing the current dwindling Nigerian economy occasioned by some anti-human and economic policies of the past PDP led administration.

Present at the meeting were, the Special Adviser to President Buhari on judiciary Reforms, Barr. (Mrs) Juliet Ibekaku, Ambassador Designate from the state, Major General Chris Eze, (Rtd), Members of the state working committee, amongst others.