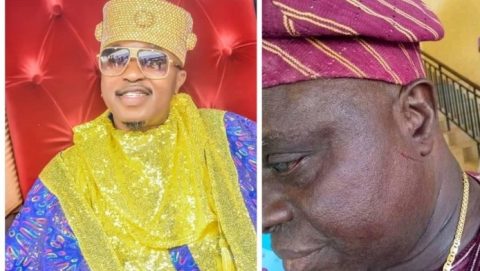 (AFRICAN EXAMINER) – The controversial Oluwo of Iwo, Oba Abdul Rasheed Akanbi, has been suspended for six months by the Osun State Council of Traditional Rulers.

The crucial meeting was presided over by the Ooni of Ife, Oba Adeyeye Enitan Ogunwusi II.

Apart from the definite suspension, the traditional Council constituted a committee headed by the Orangun of Ila, Oba Wahab Adedotun, to investigate alleged altercation between Oba Akanbi and his counterparts in Iwo Land.

Reports alleged that one of the reasons for the sanction against Oluwo of Iwo was his alleged disregard to some paramount south west traditional rulers, including the Alaafin of Oyo, Alake of Egbaland and Ooni of Ife..

Recall that Oba Akanbi allegedly assaulted a fellow traditional ruler in Iwo at a mediation meeting last week. The attacked monarchy was as a result said to sustain injury.

The suspended Oba Akanbi has since denied the alleged public misconduct.