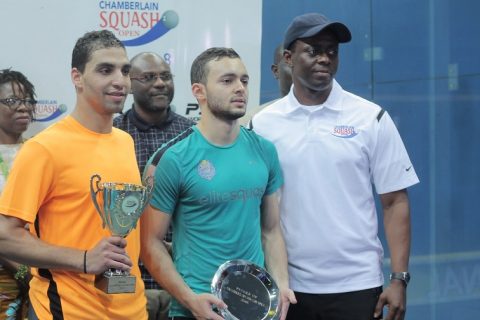 In his remarks, elated Mohammed described his journey from the qualifying rounds to his victory as very encouraging, adding that he looked forward to other PSA-sanctioned tournaments across the globe.

He thanked the organizers of the tournament for their initiative and said it would help to grow the game of Squash.

The overall female winner on her part said the victory would enable her to remain in the upward trajectory of the game.

CSO Promoter, Chamberlain Usoh in his remarks at the finals played at all glass court of the Teslim Balogun Stadium, Surulere, Lagos thanked all the players for exhibiting high level of good sportsmanship.

Again, he appreciated the Lagos State Government, sponsors of the tournament, the Squash community and fans of the sport.

Similarly, representative of the Chief Executive Officer of Century Group, Ms.  Data Jaja expressed joy that the oil servicing firm was able to support the tournament, describing theOpen as a strong platform to give back to the society – by way of Corporate Social Responsibility (CSR).

It would be recalled that the maiden edition of the Open which was played at the Lagos Country Club Ikeja in late August, 2017 was won by a Briton, Tom Ford in the men’s category. The female trophy was won by a Nigerian, Miss Yemisi Olatunji.