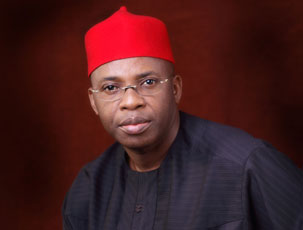 By Abdul Gaffar Bello – Former Imo State Governor Ikedi Ohakim has been granted bail by a Federal High Court in Abuja over the alleged money laundering charges against him.

The former Governor who was arrested late Tuesday and remanded Wednesday in the custody of the Economic and Financial Crimes Commission (EFCC), is being arraigned for the sum of N270m allegedly linked to his administration which lasted between 2007 and 2011.

Ohakim’s bail bond was in the same amount of the sum involved in the EFCC suit against him. Other condition of the bail was submission of his international passport as well as other travel documents to the Deputy Chief Registrar of the court.